Should Wichita expand a water system that is still in commissioning stage?

In this script from the next episode of WichitaLiberty.TV, I report my concerns about rushing a decision to expand a water production system that has not yet proven itself. 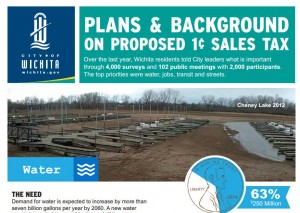 For the proposed Wichita sales tax, the largest share will go towards a new water supply. 63 percent of the tax revenue — that’s $250 million over five years — will go towards what the city has decided will satisfy our water needs. This is expansion of the Aquifer Storage and Recovery program, or ASR.

As a result of my research, I’m concerned that we don’t have a track record of success for the ASR program, but we’re thinking about putting all our eggs in that basket. Here is some history. ASR is a system north of Wichita. It draws water from the Little Arkansas River, treats it, and injects it into the Equus Beds aquifer. That’s the recharge process. That water is then available for use in the future. (Wichita already gets 40 percent of its water from the Equus beds.) There was ASR Phase 1, and now there is Phase 2. Cost so far is $247 million.

In April, Wichita Public Works Director Alan King told the city council that based on experience, we now believe we will get half the production from ASR as we originally thought. By production, we mean the amount of water that is treated and injected into the aquifer. So I did the research and I found that the ASR program has not come close to meeting this goal. This is the goal that was cut in half from the original goal.

I understand that ASR phase 2 came online during a drought. I understand that there was a learning curve. But since July 2013 — remember that’s when it started raining so much it flooded — ASR has not been performing anywhere near expectations.

In this chart, I start the horizontal axis with July 2013. The red line on top is what production was originally planned to be. Production will not necessarily be smooth, as production happens only on days when there is sufficient water in the river. But over time, this should be the trend.

The blue line is the expectations for production after being revised downwards.

In purple is actual production. Considering the 12 month stretch starting with July 2013, ASR produced 431 million gallons of recharged water. That is 23 percent of expectations, even after expectations were cut in half.

When I presented this information to the Wichita City Council this week, Alan King, the public works director, said “The information Mr. Weeks presented is accurate.” But he said my conclusions are not correct.

King told the council that during the timeframe of this chart, we weren’t looking to run the ASR system at maximum production levels. We were operating the facility in the most efficient manner possible. We were testing the individual components. We are still in a commissioning phase.

So based on this — we are still in a commissioning phase, we have not been running at maximum production levels — I believe we do not have enough experience to conclude that ASR is working. Couldn’t we wait until the ASR project is working at even half its design goal before making a decision to proceed with its expansion? This is too big a decision to make based on the scant evidence we have. Especially when we are asking low income and fixed income households to pay more sales tax on groceries to fund this project. Especially when Cheney Reservoir is full and there is no immediate crisis.

I did research on how an increase in sales tax affects households of different levels of income. Later the Wichita Eagle produced similar results. I showed that as a percentage of after-tax income, the proposed sales tax increase is four times as costly for low-income households as it is for high-income households. Remember, regarding a new water supply, we’re not worried about running out of drinking water, or even running out of water for industry and commercial users. We’re talking about restricting the watering of golf courses and lawns during an extended drought. We’re talking about not washing cars during a drought. Stripped to its essence, the city is asking low-income households to pay more sales tax on food so that lawns in wealthy neighborhoods may remain green at reasonable cost during a drought.

Here’s something else that troubles me regarding the water portion of the proposed sales tax. In the city’s informational material — the material that is meant to educate us on the issues — it’s said that if the sales tax does not pass, the city will use long-term debt to pay for ASR expansion, and that will cost an extra $221 million in interest expense. That course of action — using debt to pay for ASR expansion — is presented as a bad choice.

I want to remind you that the city borrowed over $200 million in long-term debt to pay for the present ASR system. That’s almost as much as the cost of the proposed ASR expansion.

These are the choices the city gives voters. But others alternatives are available. If the city is concerned about the cost of debt financing, why not raise the money for ASR through a period of higher water bills for five years? This has the obvious benefit of having the people who actually use water pay for it. The cost of ASR expansion could be a separate line item on water bills so that we are acutely aware of how much this system costs. It’s important that we be aware of these costs. When paid through a sales tax, it’s difficult to track the money and know the total cost of the system to you. That’s something the city and the “Yes Wichita” group counts on. In fact, they say the sales tax is just one cent. Just one penny for every dollar you spend. You won’t even notice its impact.

Paying for a new water supply through water bills would let commercial and industrial users participate in paying the cost of the project. These water users generally don’t pay a lot of sales tax. A restaurant, for example, does not pay sales tax on the food ingredients it purchases. An aircraft manufacturer does not pay sales tax on the raw materials and component parts it buys. But these companies do have a water bill. Yet, the city recommends that low income households pay more sales tax on their groceries. The city says this is the best way to pay for a new water supply to protect our lawns and golf courses during a drought.

Here’s a thought. Sedgwick County Government is in a beneficial position regarding the water supply issue. The city is too wrapped up, too invested in advancing the ASR project. There are some big egos and political careers involved. There is an engineering firm that sees a big contract in its future.

Since county government is not in the business of providing water, it does not have these distractions and distortions. I think this places the county in the position of a referee, as an unbiased observer. The county is a governmental body that sincerely wants a secure water future for its largest city and for many of the smaller cities and residents that get their water from the Wichita system. Remember, many cities like Derby rely on the Wichita water system for their water. Collecting funds through water bills lets these customers help pay for the cost of a new water supply.

If city voters decide against the sales tax, which I hope is the outcome of the election, then the county commission could take the lead. It could commission a study of water issues. Since the county is not in the business of providing water, the study could be free of the biases and ambitions that infect whatever Wichita does. It could be conducted by an engineering firm that is not advocating for its own interests, as I fear is happening with Wichita.

I realize this would cost money and take time. But the city is on the verge of rushing into what I fear will be a costly mistake. Remember, Cheney Lake is full. There is no immediate water crisis. We do not have to rush to make a decision about expanding a system that has not yet entered full production, a system that is still in the commissioning stage. Wichita voters should not accept the false choices our city government is giving us.