Responses to a news story on recycling indicate that the issue is driven more by emotion and misinformation than reason. 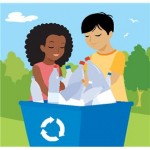 Recently I was interviewed by Carla Eckels of KMUW radio for a story titled Recycling: Is It Really Necessary? (Audio is available at that link.)

The story was based on my research and opinion that in some cases, recycling is an economically beneficial activity. But for the household setting, it is not.

(One point I meant to make, but forgot to, was that how wonderful it is that we have enough wealth that we don’t have to recycle household waste. We are free to recycle if we want, but also free to make a personal decision to spend time on activities other than recycling.)

Comments left to the story illustrate just how difficult it is to think about and debate issues of public policy. Here’s one example:

It takes absolutely no extra water to rinse cans for recycling. Just rinse them in your dishwater after washing your last dish. After all, if one is truly concerned about water conservation, handwashing uses less water than a dishwasher. As for the abundant landfill space, I suggest we open a landfill in Mr. Weeks’ backyard. Most people would object to a landfill next door, but apparently Mr. Weeks would welcome it.

This writer has a good idea — if you want to wash dishes by hand. For me, a dishwashing machine is a sign of tremendous progress by civilization, reducing drudgery and producing cleaner dishes. And, it’s a machine that nearly everyone can afford.

After that, the writer makes a ridiculous argument about landfill space. I note that this writer uses a profile name that is anonymous. While anonymous speech is important, it leads to people making patently ridiculous statements that they probably wouldn’t make if their friends and neighbors knew they said that.

I would have to disagree with Mr Weeks. The benefits far outweigh the “costs” he was mentioning. It only take a moment to look up evidence that recycling is not only beneficial for our planet but also as a business model. Single stream recycling has made this process very easy.

A point I made in the article is that households have to pay for people to collect their recyclables. Using scare quotes around “costs” is inappropriate, as the costs are real and large. This is a clue as to the economic value of recycling, which is that it works in certain instances, but not for households.

And Mr. Weeks’ comments this morning on the air regarding having plenty of landfill space in places like Kansas just made me angry. Landfills the size of Sedgwick County? —- Seriously.

In the article, I mentioned that someone calculated that a landfill 100 yards tall and 30 miles on a side could hold all trash for the entire country for the next 1,000 years. How someone makes a leap from that to multiple landfills the size of Sedgwick County shows that people just aren’t thinking closely.