How is the downtown market reacting to the slow disappearance of the Minnesota Guys?

The buildings they condoed, by selling the floors off, has created quite a mess. You have multiple property owners in one building. Some owners have the resources to fix things and others don’t, and the ones who do don’t want to pay for the guy who doesn’t. But that will work itself out through the foreclosure process. And two of their buildings went to auction — Farmers and Bankers, and the Landmark building. Kaufman is being foreclosed on, and it’s no secret that at the Wichita Executive Centre, the lender has taken over operations and is making the decisions now. So, the market is shaking them out. They’re swirling the drain.

On the condominium ownership of office building floors: Two years ago the Wichita Business Journal reported on this decline: “Prices on two bank-owned floors at the Broadway Plaza building — at the corner of Douglas and Broadway — were reduced last week to just $59,000 apiece. … They are just two of a handful office condo floors that originally were developed by Minnesota-based Real Development Corp. Most of them were sold to California investors, and many of them subsequently landed in foreclosure. Prices since then have plummeted.”

Some of these floors carried mortgage loans of over $400,000 not long ago. 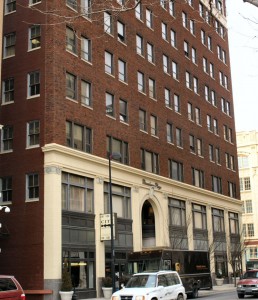 Tax values on these properties have fallen, too. According to Sedgwick County records, a typical floor in the Broadway Plaza building was appraised at around $387,000 in 2007. In 2013, the same property is appraised at only $92,000. This drop in real estate values is not reflective of the general trend of office values in downtown Wichita. A survey by two real estate firms shows rents for both class A and class B office space holding steady in downtown over the same time period.

While the floors in question are not currently owned by Real Development, and that company did not default on bank loans, the projects were developed and marketed by Real Development. And at the same time these values were plummeting, the Wichita City Council judged it was wise economic development strategy to award the Minnesota Guys millions in tax increment financing. The developers were never able to tap that financing, however.

For another downtown building, the Minnesota Guys stopped paying special assessment taxes as part of the city’s facade improvement program. The city says that these loans carry very low risk. In this case, it’s likely the city will get its money, but several years late, and only as part of the building’s foreclosure proceedings. (Bank of Kansas seeks to foreclose on Kaufman Building in downtown Wichita, June 12, 2013 Wichita Eagle)

Also, Ahern talked about the Intrust Bank Arena in downtown Wichita, which was sold to voters as an engine of economic development. 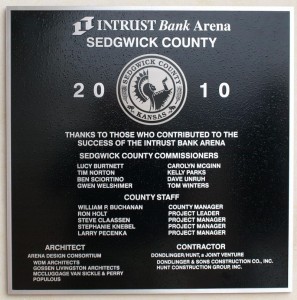 Nothing has bloomed up around the arena. Why?

So, does that mean we’ll never see any economic overflow from the arena?

I don’t think so. I see people coming from western Kansas, from Hutch or wherever, coming to country concerts, staying overnight, eating out and whooping it up at Old Town. Even with the smaller stuff, like the hockey games, there is some economic benefit.

This sober assessment is quite different than from what arena boosters promised.

The full article is A conversation with Patrick Ahern.