Wichita can advocate for government transparency, or not

Government should be responsive to citizens when they make legitimate requests for records. Wichita should not hide behind non-profit entities and tortured interpretations of the law in order to keep records secret.

When the Wichita City Council considers renewing its contract with Go Wichita Convention and Visitors Bureau, the council has another opportunity to decide whether it is truly in favor of open government and citizen access to records.

Go Wichita, along with the Wichita Downtown Development Corporation and Greater Wichita Economic Development Coalition, contends that it is not a “public agency” as defined in Kansas law, and therefore does not have to fulfill records requests. Mayor Carl Brewer and most council members are comfortable with this tortured interpretation of the law. Inexplicably, the Sedgwick County District Attorney agreed with the city.

I, along with many others, believe the city’s interpretation of the law is incorrect. So do many in the Kansas Legislature, and action may be taken there to eliminate the ability of Wichita to keep public records from the public. We can call it Gary’s Law, after Wichita City Attorney Gary Rebenstorf, who provides the legal advice the city relies upon.

The legal stance of the City of Wichita certainly isn’t good public policy. Citizens should be able to learn how taxpayer money is spent. Agencies like Go Wichita, WDDC, and GWEDC need to open their check registers as has Sedgwick County, for example.

In the meantime, there is nothing to prevent the city from asking Go Wichita to act as though it was a public agency as defined in the Kansas Open Records Act and to fulfill records requests. This would let Wichitans know that the city is truly interested in open and transparent government.

It’s easy to bluster about open government. In one of his “State of the City” addresses, Mayor Brewer promoted the city’s efforts in accountability and transparency, telling the audience: “We must continue to be responsive to you. Building on our belief that government at all levels belongs to the people. We must continue our efforts that expand citizen engagement. … And we must provide transparency in all that we do.” Many other city documents mention transparency as a goal for the city.

Earlier this year, the city won an award for government transparency regarding the city’s website. In a statement, the city manager said the city “will continue to empower and engage citizens by providing information necessary to keep them informed on the actions their government is taking on their behalf.”

Until the city asks that these quasi-governmental organizations subject themselves to the Kansas Open Records Act, the message from the City of Wichita is clear: Accountability and transparency is provided on the city’s terms, not on citizens’ terms and the law.

Why open records are important

Here’s an example as to why this issue is important: In 2009 Mike Howerter, a trustee for Labette Community College, noticed that a check number was missing from a register. Based on his inquiry, it was revealed that the missing check was used to reimburse the college president for a political contribution. While it was determined that the college president committed no crime by making this political contribution using college funds, this is an example of the type of information that citizens may want regarding the way public funds are spent.

This is the type of information that I have requested. It is what is needed to perform effective oversight. It is what the City of Wichita has decided to avoid.

This item in the past

Two years ago I asked that the city council approve the contract with Go Wichita only after adding a provision that Go Wichita consider itself a public agency under the Kansas Open Records Act. Following are a few notes from the meeting (video may be viewed here or at the end of this article):

Discussion of this matter at the meeting reveals that city staff believes that the annual reports filed by Go Wichita along with periodic checks by city staff are sufficient oversight.

Randy Brown, who is chair of the Kansas Sunshine Coalition for Open Government and former opinion page editor of the Wichita Eagle was at the meeting and spoke on this matter. In his remarks, Brown said “It may not be the obligation of the City of Wichita to enforce the Kansas Open Records Act legally, but certainly morally you guys have that obligation. To keep something cloudy when it should be transparent I think is foolishness on the part of any public body, and a slap in the face of the citizens of Kansas. By every definition that we’ve discovered, organizations such as Go Wichita are subject to the Kansas Open Records Act.”

Brown said that he’s amazed when public officials don’t realize that transparency helps build trust in government, thereby helping public officials themselves. He added “Open government is essential to a democracy. It’s the only way citizens know what’s going on. … But the Kansas Open Records Act is clear: Public records are to be made public, and that law is to be construed liberally, not by some facile legal arguments that keep these records secret.”

He recommended to the council, as I did, that the contract be contingent on Go Wichita following the Kansas Open Records Act.

Misunderstanding the scope of KORA

In remarks from the bench Wichita City Council Member James Clendenin (district 3, southeast and south Wichita) asked the city manager a series of questions aimed at determining whether the city was satisfied with the level of service that Go Wichita has provided. He then extended that argument, wondering if any company the city contracts with that is providing satisfactory products or service would be subject to “government intrusion” through records requests. Would this discourage companies from wanting to be contractors?

First, the Kansas Open Records Act does not say anything about whether a company is providing satisfactory service to government. That simply isn’t a factor, and is not a basis for my records request to Go Wichita. Additionally, the Kansas Open Records Act contains a large exception, which excepts: “Any entity solely by reason of payment from public funds for property, goods or services of such entity.” So companies that sell to government in the ordinary course of business are not subject to the open records law. Go Wichita is distinguished, since it is almost entirely funded by taxes and has, I believe, just a single client: the City of Wichita.

Finally, we should note that the open records law does not represent government intrusion, as Clendenin claimed. Open records laws offer citizens the ability to get an inside look at the working of government. That’s oversight, not intrusion.

Is the city overwhelmed with records requests?

Wichita City Council Member Pete Meitzner (district 2, east Wichita) asked that there might be a workshop to develop a policy on records requests. He expressed concern that departments might be overwhelmed with requests from me that they have to respond to in a timely fashion, accusing me of “attempt to bury any of our departments in freedom of information acts [sic].”

In making this argument, Mr. Meitzner might have taken the time to learn how many records requests I’ve made to the city. The answer, to the best of my recollection, is that I have made one request this year to the city citing the open records act. It was denied. I have made perhaps a half-dozen informal requests, most of which I believe were fulfilled consuming just a few moments of someone’s time.

As to his concern over the costs of fulfilling records requests: The law allows for government and agencies to charge fees to fulfill requests. They often do this, and I have paid these fees. But more important than this, the attitude of council member Meitzner is typical of elected officials — disdain for providing records to citizens. Government should be responsive to citizens. As Randy Brown told the council, government should welcome opportunities to share information and be open and transparent. The city should not hide behind non-profit entities and torture the law in order to keep records secret.

Randy Brown’s remarks are an excellent summation of the morality and politics of the city’s action and attitude regarding this matter.

The council ought to be wary of taking legal advice from city attorney Gary Rebenstorf. He has been wrong several times before when issuing guidance to this council regarding the Kansas Open Meetings Act, which is similar to the Open Records Act. He’s taken the blame and apologized for these violations. He was quoted in the Wichita Eagle as saying “I will make every effort to further a culture of openness and ensure that like mistakes are avoided in the future.”

But Rebenstorf’s attitude, as gauged accurately by Randy Brown, is to rely on facile legal arguments to avoid complying with the clear meaning and intent of the law.

Why city council members would be opposed to what I have asked is unknown. Perhaps they know that among the public, issues relating to open records generally aren’t that important. Citizens ought to note the actions of Mayor Brewer. The mayor could easily put this matter to an end. He speaks of wanting to have open and transparent government, but when it comes time to make a tough call, his leadership is missing.

It’s becoming evident that Kansans need a better way to enforce compliance with the Kansas Open Records Act. It seems quite strange that local district attorneys are placed in a quasi-judicial role of deciding whether citizen complains are justified. If citizens disagree — and nearly everyone I’ve talked to thinks that the opinion issued by the Sedgwick County District Attorney is this matter is nonsensical and contrary to the letter and spirit of the law — they find themselves in the position of suing their government. That is costly, and citizens soon realize their own taxpayer dollars are used against them. 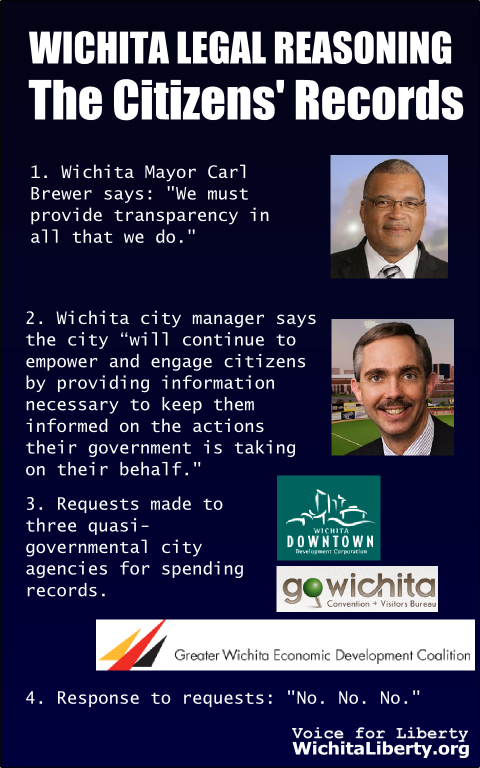