Spending and taxing in Kansas

Difficulty balancing the Kansas budget is different from, and has not caused, widespread spending cuts.

Across the state Kansas newspapers declare Governor Sam Brownback’s tax cuts a failure. There are two prongs of criticism. One is that the budget is not balanced; that is, the state is spending more than it has received in revenue. That has been true, especially for fiscal years 2014 and 2015. That problem can be fixed by either collecting more revenue, or by cutting spending. Last year the Governor and the Legislature decided to balance the budget by relying, almost entirely, on collecting more revenue. Raising taxes, in other words.

The second prong of attack on the tax cuts is to hold them responsible for spending cuts. This is what really upsets the state’s liberals and moderates. Here’s an example. Former Kansas State Budget Director Duane Goossen recently wrote “The Brownback tax cuts brought the revenue stream down so significantly that truly damaging expense cuts coupled with a sales tax increase have not repaired the budgetary mess.” (emphasis added) (I will agree with Goossen that we have a problem with the budget, a problem that could be fixed with relatively small reforms in spending. But Goossen wants more revenue.)

But have there been severe spending cuts in Kansas? “Truly damaging” cuts? While some programs have been trimmed, overall state spending continues on a largely upward trend (for all funds spending) or remains mostly flat (for general fund spending).

Is this an important distinction?

For the years when Kansas was spending down its bank balance, the state was experiencing the benefit of Washington-style deficit spending. That is, the state was spending more than it collected in revenue. The difference is that Kansas made up the revenue deficit by using savings rather than debt. (At least mostly so.)

(Another difference between Kansas and federal spending is that Kansas can’t continue to borrow to support spending unless it engages in extraordinary measures, some of which may have happened. The federal budget, however, has been in a permanent state of deficit spending since 2000 and appears to remain in deficit for as far as anyone can project.)

The takeaway is that problems with balancing the budget is not the same as spending cuts. We’ve had the former, but not the latter, when considering the entire budget.

Nearby charts show Kansas government spending, from both the general fund and all funds spending. One chart shows total dollars spent, and one shows per-capita spending. Both are adjusted for inflation. On these charts it’s difficult to see where total spending has been cut or slashed in recent years. All funds spending continues its upward trend, with a few exceptions. General fund spending remains level or trending slightly upwards. 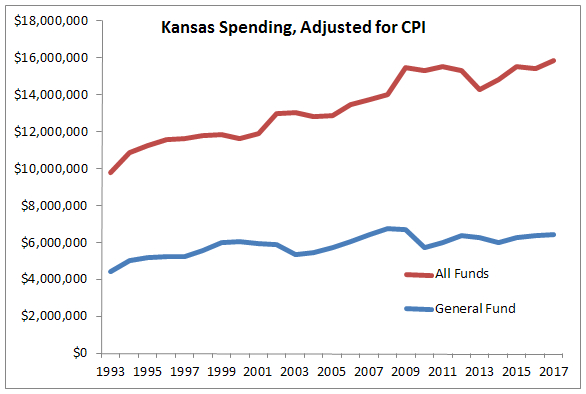 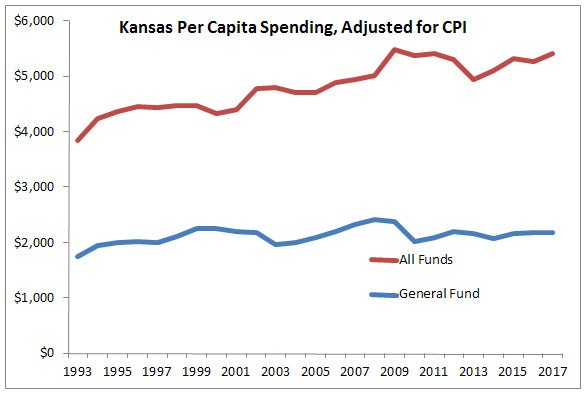 Notes for charts:
Data is from Kansas Fiscal Facts 2015
2015 through 2017 are approved figures, not actual spending
2015 and beyond population are my estimates
CPI is Consumer Price Index – All Urban Consumers, CUUR0000AA0