Two Versions of the Income Tax Cuts: The Media’s Story and Reality

In January 2011, when I was first appointed State Budget Director, the state was on the verge of what appeared to be a financial meltdown. Under the previous administration, the first negative ending balance in state history had been allowed exist. Kansas was $27.6 million “in the hole” and this headline was on the front page of the Wichita Eagle “Shortfall for ’11 State Budget Tops $500 million.” Much of the first six months was spent trying to not bounce checks and finding areas to cut spending immediately. We also spent considerable time giving agencies more flexibility to spend down unencumbered funds as agencies had previously been allowed to overspend available funding, a typical policy of Gov. Mark Parkinson and his Budget Director Duane Goosen. However, even as I was using the power the Budget Director holds to operationally limit spending I realized the media’s claim of a $500 million shortfall was an exaggeration.

At the end of the first six months Kansas had $188 million in the bank and within eighteen months the state ended fiscal year 2012 with a $502.9 Million ending balance. This would have been lost to citizens who weren’t doing their own research. They never would have known that the “budget” crisis had passed because the media had moved onto their next “crisis” without revisiting the initial headlines and, in the process, calling into question their first reports.

The media’s next “crisis” was centered on the individual income tax cuts that were passed in 2012. The bill to reduce the tax burden on citizens “would slash income taxes and is expected to produce a $2 billion deficit within five years” according to theWichita Eagle’s article. The Kansas City Star led with this quote of “state fiscal analysts projecting budget deficits reaching $2.5 billion in 2018.” Just to further emphasize the dire situation the Star added this scare from a representative of a special interest group with no known expertise on the economic impact of lower tax burdens by saying that the tax cuts, “have an enormous impact on everything from public education to public health coverage to infrastructure to other vital social safety-net services.”

Who are these “state fiscal analysts” that the media used to fan the flames and how did this version of a looming fiscal crisis occur? The state fiscal analysts are staff of the Kansas Legislative Research Division (KLRD) which presents their projection of the impact on the state’s finances of any change in tax regulations. Here are the numbers from KLRD’s analysis of Senate Bill Substitute for House Bill 2117 — the tax cut bill — and the impact on the state’s budget:***

The approach used by KLRD to generate these numbers is not consistent with the realities of state finances. There are three fundamental problems with KLRD’s analytic techniques which create these illusions of fiscal crises where none exists.

A more realistic view of Senate Bill Substitute for House Bill 2117 puts things in perspective. The following chart shows what has transpired, to date, based on the effects of the tax cuts. It is very good example of why citizens should take media accounts based on KLRD’s numbers with a full shaker of salt. 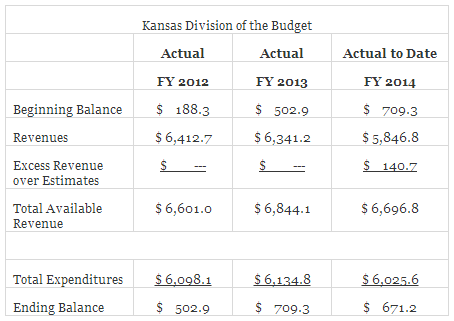 The net difference between KRLD’s ending balance and what the current actual receipts show is $913.4 million. The crisis of the “enormous impact on everything from public education to public health coverage to infrastructure to other vital social safety-net services” that the Kansas City Star’s “expert” on the tax cuts predicted hasn’t occurred. But, we have not yet heard the Eagle or the Star report these facts.

Kansans simply haven’t heard that, after returning $231.2 million to taxpayers in FY-2013 and ANOTHER $802.8 million in fiscal year 2014, ending balances were actually up nearly a billion dollars over the estimates! Estimates that directly led to some dire headlines upon their initial release. Returning nearly a billion dollars to Kansans’ pocket books while ending balances have been steady or increasing is an incredible story of success that media would want to share with readers.

Citizens of Kansas have a right to hear forecasts of disasters but they also deserve to be told by those same media outlets that those forecasts didn’t match what actually took place and that things are going well. Citizen should insist that their legislators request that KLRD begin a policy of only producing projections for a reasonable number of future years based on the realities of the Kansas Constitution. This would limit the use of statistically flawed data being used to fuel for the fire of those who are playing politics under the guise of “news reporting.”

I will follow up shortly with part two of this story on where the state’s finances are headed including commentary and possible adjustments to April 2014 Consensus Revenue Estimates.