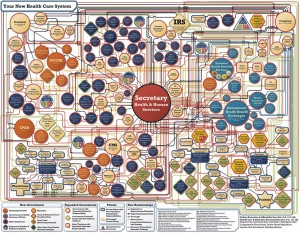 Republicans of the Joint Economic Committee of the U.S. Congress have released an update of a chart to help us navigate ObamaCare. (Click on it for a larger version.) From the July 2010 press release accompanying the original chart: “Four months after U.S. House Speaker Nancy Pelosi famously declared ‘We have to pass the bill so you can find out what’s in it,’ a congressional panel has released the first chart illustrating the 2,801 page health care law President Obama signed into law in March. Developed by the Joint Economic Committee minority, led by U.S Senator Sam Brownback of Kansas and Rep. Kevin Brady of Texas, the detailed organization chart displays a bewildering array of new government agencies, regulations and mandates.”