The American Conservative Union has released its ratings for the 2015 Kansas Legislature.

In a press release, ACU said “This year’s ratings of the 2015 Kansas legislature by the American Conservative Union Foundation revealed that a little over a quarter of all Republican legislators are willing to do what it takes to defend the freedom of everyday Kansans. After an analysis of their voting records, ACU will recognize 36 members for their effort to work towards enacting conservative solutions.” 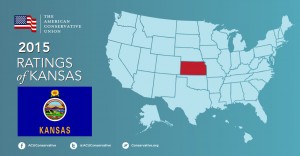 According to ACU, the ratings are based on constitutional principles: “Like our Congressional ratings, ACU’s State Ratings reflect how elected officials view the role of government in an individual’s life. Kansas legislators with the strongest scores consistently voted with the ideals articulated in our U.S. Constitution.”

ACU says these members will receive a 2015 ACU Ratings Award:

The ACU press release is here, and the full report with vote explanations and rakings for all members is here.