How would higher Kansas taxes help?

Candidates in Kansas who promise more spending ought to explain just how higher taxes will — purportedly — help the Kansas economy.

Are low taxes important to an economy, especially a state economy? When the Tax Foundation looked at the issue, it concluded this: “In this review of the literature, I find twenty-six such studies going back to 1983, and all but three of those studies, and every study in the last fifteen years, find a negative effect of taxes on growth.”1

Many of these studies concerned the national economy and taxes, but some looked at state taxes. When we look at Kansas, we see that Kansas already taxes and spends quite a lot, compared to other states. Nearby is a chart showing per-capita state tax collections in Kansas and Colorado.2Looking at other data, I found that considering all state and local government employees in proportion to population, Kansas has many, compared to other states, and especially so in education.3From another source of data, I found this: “In the visualization, you can see that Kansas spends quite a bit more than nearby states. Of special interest is Minnesota, which is often used as an example of a high-tax state, and a state with excellent schools and services. But Minnesota spends barely more than Kansas, on a per-person basis. What about Colorado? It seems that Kansans often look to Colorado as a state full of bounty. But Kansas outspends Colorado. Same for New Mexico, Wisconsin, Texas, and — especially — Missouri.”4

Please don’t argue that the economic health of a state is determined by its budget, that is, whether it is balanced or not. And if you want to argue that Kansas has borrowed money through the highway fund and spent it in the general fund: That’s true, and we should not do that. But that action allowed Kansas to keep spending, much like borrowing allows the federal government to keep spending more that it raises through taxes.

Some argue that if the state taxes more, it can spend more, and therefore the economy expands. But: The money taken from Kansans is money that they can’t spend. And if one wants to argue that government spends more carefully and efficiently than do private individuals spending their own money — well, give it a try. Empirically, not many people believe this.

And isn’t government spending the purpose of taxation? Nearby are figures showing Kansas general fund spending. You can see that for two years Kansas spent much more than it collected in revenue, using a large ending balance as the source of funds. If one believes in the Keynesian theory of fiscal effects — which most liberals and progressives do — this “deficit” spending spared spending cuts and therefore boosted the Kansas economy.

Regarding the spending cuts that some claim: Have there been severe spending cuts in Kansas? While some programs have been trimmed, overall state spending continues on a largely upward trend (for all funds spending) or remains mostly flat (for general fund spending), after accounting for population and inflation.5 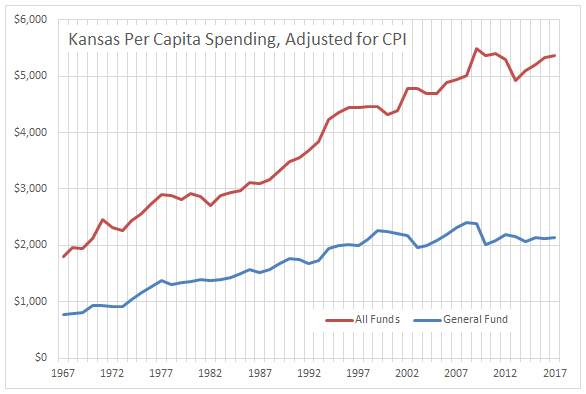 We also hear that the Kansas economy is in bad shape because tax revenue has fallen short of estimates. This is not a good indicator of economic health. Instead, it illustrates the difficulty of economic forecasting. Moreover, the negative estimate variances — revenue shortfalls, in other words — in 2002 to 2003 and 2009 to 2010 were generally much larger in magnitude than those of recent years.6 Remember how the Obama administration told us that without the 2009 stimulus package unemployment would rise to a certain level? Well, the stimulus bill passed, we spent the money, and unemployment was higher than what the administration said it would be without the stimulus. And for a long time, too.7

We also hear that transfers from KDOT — the highway fund — have hurt Kansas, especially in construction jobs. Our state’s two largest newspapers recently editorialized on this matter.8 They correctly reported that Kansas construction jobs were down. But it wasn’t highway construction jobs that caused the loss of jobs, except for a very small portion.

Furthermore, the state has continued to spend on highway programs, without regard to transfers from the highway fund. When we look at actual spending on roads, we see something different from what is often told. KDOT’s Comprehensive Annual Financial Report shows spending in the categories “Preservation” and “Expansion and Enhancement” has grown rapidly over the past five years. Spending in the category “Maintenance” has been level, while spending on “Modernization” has declined. For these four categories — which represent the major share of KDOT spending on roads — spending in fiscal 2015 totaled $932,666 million, up from a low of $698,770 in fiscal 2010.

We should not borrow money, place it in the highway fund, and then transfer the funds to the general fund, as the state has done for many years. But actual spending on highways has risen, nonetheless.

So: Just how will higher taxes help the Kansas economy?