Job growth, Kansas and other states

Critics of Kansas Governor Sam Brownback and his economic growth plans say Kansas hasn’t been creating jobs. A look at the statistics tells us that Kansas has produced substandard performance in job growth for a long time. 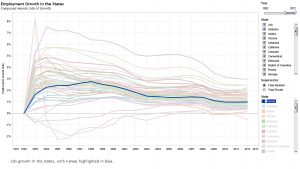 The nearby chart (click for a larger version) shows the compound annual rate of growth of jobs in the states, with Kansas highlighted in blue.

From 1992 to 2012, Kansas created jobs at the rate of 1.022 percent per year, compounded. Arkansas managed 1.096 percent over the same period. That seems like a small difference, just 0.074 percentage points. But over time, compounding adds up, so to speak. If both states started with one million jobs and continued growing at these rates, in ten years Arkansas would have 8,136 more jobs than Kansas. In 20 years, the difference would be 18,080 jobs. That’s about as many people as work in each of Finney and Ford Counties, home to Dodge City and Garden City, respectively.

Or, consider Texas, the state Kansas progressives love to hate. It’s has created jobs at the rate of 2.001 percent. If both states started with one million jobs and grew at these rates, in ten years Texas would have 112,083 more jobs than Kansas would have. In 20 years the difference would be 260,722 jobs. That’s almost as many people as work in the Wichita metropolitan area.

If you’d like to use the interactive visualization of state employment data, you may click here to open it in a new window. Data is from Bureau of Labor Statistics, U.S. Department of Labor. Visualization created using Tableau Public.