Kansas needs to focus on growth when wrapping up session 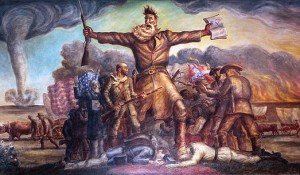 As the Kansas Legislature prepares to end its 2013 session, budgetary and taxation issues remain to be resolved. It’s important that the legislature resolve these issues in a way that positions Kansas for economic growth, rather than retaining the policies that have led to stagnation compared to other states.

First, let’s stop talking about the need to “pay for tax cuts.” The only way in which tax cuts have a cost is if you believe that your income belongs first to government, and then to you. While that schema is preferred by Kansas Progressives, it’s contrary to freedom and destructive to jobs and prosperity. Kansas will be better off if Kansans are able to control more of their own spending, rather than having government spend it for them.

Second, we must remember that the projected “holes in the budget” or deficits have two moving parts: Income and spending. Any deficit or surplus is produced equally by both factors. A reduction in income to the government produces a deficit only if government chooses to keep spending.

Fourth, we need to make sure that everyone is starting from the same set of facts. Here’s one example: While critics of the new Kansas tax policy focus on the elimination of state income taxes on certain forms of business organization, marginal tax rates were lowered for everyone. Additionally, the standard deduction was increased for everyone, meaning that zero tax is paid on a larger share of everyone’s income.

But one tax was raised. Kansas had a program that rebated sales tax paid on food. This was limited to those with modest incomes or over a certain age. It is generally recognized that the sales tax is a regressive tax, meaning that those with low incomes pay a larger share of their income in tax. Reducing this perceived inequity was the goal of the credit program.

In recognition of this, Kansas should eliminate the sales tax on food, especially if we keep the current high sales tax rate. This eliminates the clunky tax credit program and lets everyone save on food taxes every day, not just at tax filing time.

Critics also say that taxes were raised on some low income families. This argument is based on some tax credit programs that were eliminated, such as the tax credit for child and dependent care expenses, and another tax credit for child day care expenses. It’s important to remember that these programs were implemented as a tax credits, and they are properly categorized as welfare spending accomplished through the tax system. If we want to keep this welfare spending, let’s do it some other way. Spending through the tax system complicates the understanding of government finances.

What Kansas should do

Here’s what the Kansas Legislature needs to do: Keep the current sales tax rate, eliminate sales tax on food, and reduce individual income and corporate income tax rates. Reduce the income tax rates by an amount that would be revenue-neutral, so that state spending does not grow. This moves us towards more of a “Fair Tax” model, which many economists agree is better than taxing income. Elimination of the sales tax on food removes much of the regressivity of the sales tax.

To the extent that the legislature believes it needs other funds, take it from transportation funding. We’ve spent a lot on roads and highways in recent years. It’s enough for now.

Another important thing the legislature needs to do is get serious about reducing government spending. Kansas lost an important chance to save money — although a relatively small amount — when school choice programs failed to pass. These programs, across the country, save state and local governments money. Unfortunately, Kansas legislative leaders did not use this argument.

More ways to save: In 2011 the Kansas Legislature lost three opportunities to save money and improve the operations of state government. Three bills, each with this goal, were passed by the House of Representatives, but each failed to pass through the moderate-controlled Senate, or had its contents stripped and replaced with different legislation.

Each of these bills represented a lost opportunity for state government services to be streamlined, delivered more efficiently, or measured and managed. These goals, while always important, are now essential for the success of Kansas government and the state’s economy.

One bill was called the Kansas Streamlining Government Act, another would have created the Kansas Advisory Council on Privatization and Public-Private Partnerships, and another would have created performance measures for state agencies and report that information to the public. More information on these bills is at Kansas budget solution overlooked.

We have to wonder why these bills — or similar measures — were not introduced and advanced this year when the opposition in the Senate is weaker. These are the types of measures we need to take as a state.