Who is harmed by the Kansas food sales tax?

In Kansas, the leading candidates for governor have proposed reducing or eliminating the sales tax on food. Kansas has high sales tax on food, being among the few states that tax food at the same rate as other goods and services. Who would benefit from this proposed cut?

In 2014, Wichita considered adding a one-cent-per-dollar sales tax. To examine the effect of this proposed tax, I gathered data from the Census Bureau regarding expenditures by households of varying income levels and performed analysis. The results confirm the common claim that sales taxes are regressive. That is, sales taxes affect low-income households most severely.

One of the criticisms of a sales tax is that it is regressive. That is, it affects low-income families in greatest proportion. This is an important consideration to explore, because in November Wichita voters will decide whether to create a new city sales tax of one cent per dollar. If enacted, the sales tax in Wichita would rise from 7.15 percent to 8.15 percent.

It’s an important issue because to hear some people talk, it seems as though they are saying the proposed tax is “one penny.” Anyone can afford that, they say. But the tax is an extra penny on each dollar spent, meaning that the cost of, say, fifty dollars of food at the grocery store increases by fifty cents, not one penny.

To explore the effect of the proposed sales tax on families of different incomes, I gathered data from the U.S. Census Bureau, specifically table 1101, which is “Quintiles of income before taxes: Annual expenditure means, shares, standard errors, and coefficient of variation, Consumer Expenditure Survey, 2012, (Selected Values).” This table divides families into five quintiles. It gives annual expenditures for each quintile in various categories. For each category, I judged whether it is subject to sales tax. For example, for housing, I indicated it is not subject to sales tax. This is not totally accurate, as some of the spending in this category may be for taxable items like maintenance and repair supplies. Food is subject to sales tax in Kansas, although low-income families may apply for a rebate of the tax. Despite these shortcomings, I feel this data gives us an approximation of the effect of the sales tax. (Click on the table to view a larger version, or see below for how to obtain the data.) 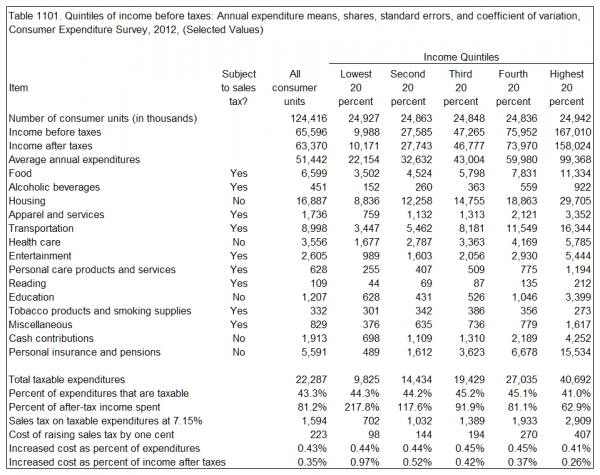 As you might imagine, as income rises, so does total taxable expenditures. Of interest, the percent of expenditures that are taxable is relatively constant across income levels.

This means that the lowest income class of families experience an increase nearly four times the magnitude as do the highest income families, as a percentage of after-tax income. This is the regressive nature of sales taxes illustrated in numbers, and is something that Wichita policy makers and voters should consider.