Since 1997, Kansas gross domestic product has grown 89.1 percent. The United States as a whole has grown 88.2 percent.

Considering compound annual rate of growth for the same period, the rate for Kansas is 4.34 percent, and for the U.S. the rate is 4.31 percent.

So the record for Kansas is right about in the middle of the states. Not good, but not bad either. 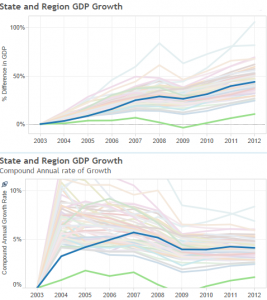 Of note: Kansas Democrats have announced their speaker for their annual Washington Days celebration. It’s Jennifer Granholm, who was governor of Michigan from 2003 to 2011. In the nearby illustration (click it for larger version) of state GDP, Kansas is highlighted in blue. The green line that stands out from all other states is Michigan.

If you’d like to use the interactive visualization of state GDP data, you may click here to open it in a new window. Data is from U.S. Bureau of Economic Analysis along with author’s own calculations. Visualization created using Tableau Public.