Kansas job loss claims seem not to add up

The Kansas City Star carried a story about Kansas jobs and unemployment. The claim was made that “Put another way: Kansas has lost more than 8,800 jobs this year.”

Kansas Representative Paul Davis, a Democrat who has said he will run for governor next year, linked to the article on his Facebook page and made a statement based on the job loss claim, writing “Kansas has lost nearly 9,000 jobs in 2013.”

I don’t know what data the Star reporter relied on, or what computations he made. I gathered statistics from the Kansas Department of Labor. I’ve made them available here, and a chart is below.

Job levels can be seasonally adjusted, or not. Using the seasonal data, total non farm employment in Kansas rose from 1,366,900 in January to 1,372,000 in August, the last month for which data is available. 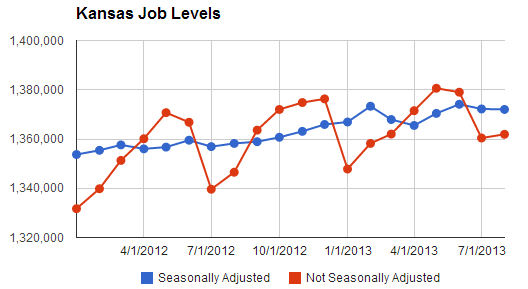