On Kansas tax experiment, we do know what doesn’t work: High taxes

Those who criticize lower Kansas tax rates tax rates as an experiment that may not work should be aware that we know with certainty what hasn’t worked in Kansas.

There are a number of ways to measure the performance of an economy. Often the growth of jobs is used. That’s fine. Here I present an alternative: the gross domestic product for a state. As with job growth, it is not the only measure of a state’s economy. GDP is a comprehensive measure, encompassing changes in population, employment, and productivity. The nearby static illustration from an interactive visualization shows Kansas (highlighted in blue) compared to some neighboring states.

Neither of these trends is recent. The Kansas economy has been underperforming for many years. We need no experiment to tell us this. It is in our data, and is part of the legacy of decades of moderate Kansas leadership. 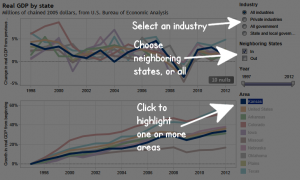 The visualization holds data from the U.S. Bureau of Economic Analysis. You may click on a state’s name to highlight it. You may choose different industry sectors, such as government or private industry.