For April 2021, Kansas tax revenue was 69.9 percent greater than April 2020. Over the ten months of the current fiscal year, revenue is 19.5 percent higher than at the same point of the previous year. There are caveats to consider.

Also, after one year of pandemic, we know how it affected tax collections.

As can be seen in a nearby table, tax revenue for fiscal year 2021 is $1,114.0 million greater than at the same time in the previous fiscal year. Of this, about $395 million is due to the increase in individual income tax revenue. (Click tables and charts for larger versions.)

One year of pandemic

The response to the pandemic started in March 2020. We have 12 months of pandemic-affected tax collection data. How does this period compare with the same period one year prior? This is an important question. 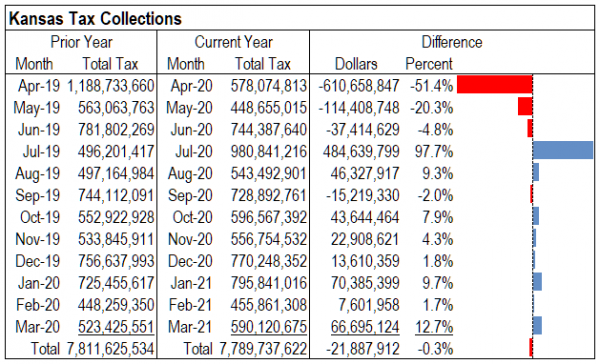 I’ve also prepared a similar table, but for years ending in April. For the year ending in April 2021, tax revenue is $993.1 (13.8 percent) greater than the same period one year prior. But we must remember that the current period contains two income tax deadlines for two tax years. In her press release on the April collections, Kansas Governor Laura Kelly noted the large increase (69.9 percent) over last April: “This increase is due, in part, to businesses having opened back up compared to the same month last year.” While true, this is quite an understatement. The change in income tax deadlines had a far larger effect, perhaps four times as large.

My report on tax revenue for April details some changes made by the estimating group.

My interactive visualization of Kansas tax revenue has been updated with this data. Click here to use it.

The governor’s press release for this data is at Governor Laura Kelly Announces April Tax Receipts. 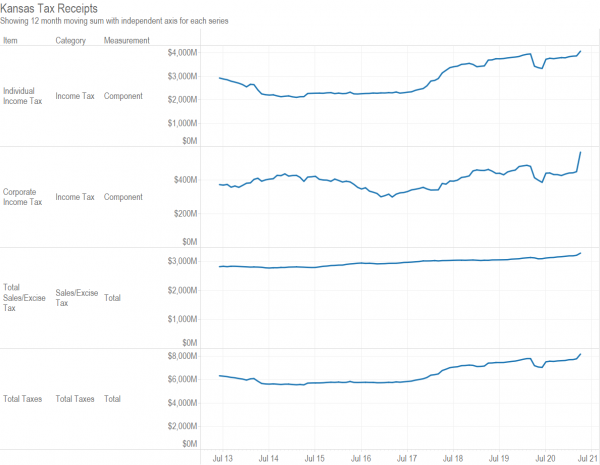