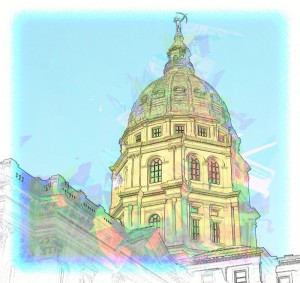 There’s been dueling claims and controversy over employment figures in Kansas and our state’s performance relative to others. I present the actual data in interactive visualizations that you can use to make up your own mind.

(Let’s keep in mind that jobs are not necessarily the best measure of economic growth and prosperity. Russell Roberts relates an anecdote: “The story goes that Milton Friedman was once taken to see a massive government project somewhere in Asia. Thousands of workers using shovels were building a canal. Friedman was puzzled. Why weren’t there any excavators or any mechanized earth-moving equipment? A government official explained that using shovels created more jobs. Friedman’s response: ‘Then why not use spoons instead of shovels?'”)

It’s important to note there are two series of employment data provided by the U.S. Bureau of Labor Statistics, which is part of the U.S. Department of Labor. The two series don’t measure exactly the same thing. Nearby is an example of just how different the two series can appear. 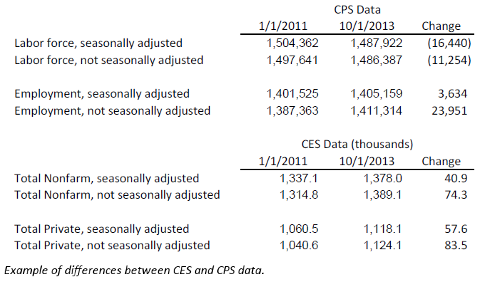 I’ve gathered data from BLS and made it available in two interactive visualizations. One presents CPS data; the other holds CES data. You can compare states, select a range of dates, and choose seasonally-adjusted or not seasonally-adjusted data. I’ve create a set that allows you to easily choose Kansas and our nearby states, since that seems to be relevant to some people. (I included Texas in this set, as we often compare ourselves to that state.) The visualizations are indexed, meaning that each shows the percentage change in values from the first data shown.Here is the visualization for CES data, and here is visualization for CPS data.