Steve Rose and Jim Denning on the Kansas economy

It’s helpful for Kansans to have commentary and factual injection accompany a Steve Rose editorial in the Kansas City Star. In this case let’s look at a column based on his interview with Kansas State Senator Jim Denning.

Steve Rose: “The numbers can be sliced and diced to make a positive or negative picture, but it is undeniable that Kansas government itself is virtually bankrupt, and Brownback’s tax policies are responsible.”

A government can balance a budget by taxing more or spending less. We see the clear preference of Rose here: There is not enough taxation. We now have an efficiency study that shows some ways to save money. The question is why didn’t the legislature commission this study in 2012, the year in which it cut taxes?

“[State Sen. Jim Denning of Overland Park] Denning said: ‘The governor rolled the dice on the most aggressive tax cut policy in history, and things just did not turn out the way he expected.'”

It’s a shame to see Republicans — or anyone, for that matter — referring to tax cuts as “rolling the dice.” Cutting taxes simply means that people are allowed to keep more of what is rightfully theirs in the first place — which is a good thing. There is legitimate concern that the 2012 tax cuts were distributed in an unfair or unwise way. The way to fix that is to cut taxes for those who didn’t receive the purportedly unfair cuts. 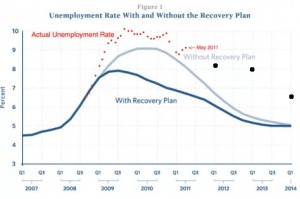 As far as the results of the tax cuts, the governor should not have bragged as he did. The ability of government to manage the economy is limited, especially at the state level. Consider the Obama stimulus. The nation’s unemployment rate was always above the rate the administration predicted if there were no stimulus. See Brownback and Obama stimulus plans. 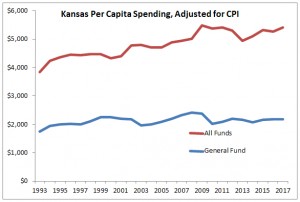 Further, what is the role of taxation in Kansas? Is it taxation or government spending that is purportedly good for the Kansas economy? Is it to support spending? If so, the tax cuts have not have an effect on spending. While some programs have been trimmed, overall state spending continues on a largely upward trend (for all funds spending) or remains mostly flat (for general fund spending). See Spending and taxing in Kansas.

The LLC loophole Denning refers to is the zero income tax on pass-through business income. Eliminating it and recapturing the $200 million would not have balanced the Kansas budget. In fiscal years 2014 and 2015 the state spent $340 million and $308 million more than it took in as revenue. Spending restraint is necessary.

Denning: “The Legislature has controlled spending to the lowest levels on record. … Our constituents wanted us to reduce spending, and we did.”