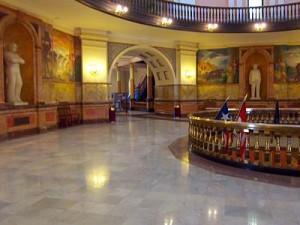 That executive, Don Moler, being a taxpayer-funded lobbyist himself, has a direct financial stake in the matter.

The bill of interest is SB 109, described here.

How bad a problem is taxpayer-funded lobbying? Here’s what Phil Kerpen wrote:

Taxpayer-funded lobbying is a self-perpetuating problem. … The perpetual big-government expansion machine must be shut down. State and local governments already have their interests represented in Congress — by the senators and representatives whose job it is to represent their constituents. The enormous diversion of taxpayer resources entailed in siphoning off tax dollars at the state and local level to pay for lobbyists who push for ever bigger government must stop. Tax dollars should be used to deliver necessary government services, not to lobby for bigger government.

One thing they do is testify before committees, in both verbal and written form.

Another thing they do is to prepare reports for the clients, advising them on upcoming legislation, analyzing how it affects them, and what the prospects for the bill might be.

They also meet with legislators and their clients, which are your elected officials.

I see nothing in the Kansas Open Records Act that allows local governmental units in Kansas to refuse disclose these documents: testimony, reports by lobbyists to their government clients, and the lobbyists’ calendars (or billing records for contract lobbyists).

Instead of making citizens ask for these records, possibly paying fees to obtain what they’re already paying for, why don’t local governments post these documents immediately on their websites?

If the actions taken by taxpayer-funded lobbyists are truly in the public interest, you’d think that cities, counties, and school boards would already be making this information easily available. In any case, there should be no resistance to starting this program immediately. Today, as the legislature is currently in session.

If any local governmental units feel this is too much of a burden, here’s my offer: When your lobbyist sends you an email with testimony, legislative reports, or anything else, just forward the email to me ([email protected]). I’ll take care of the rest.