The Importance of Agriculture in Kansas

In Kansas, is agriculture our “largest industry,” as Governor Laura Kelly says?

(1)Laura Kelly [@LauraKellyKS]. “When We Talk about Jobs, We Can’t Forget to Take into Account Our Largest Industry: Agriculture. Business Investment Is on the Rise in Our Ag Industry, Creating More Opportunities for Kansas Families, a Stronger Economy, and a Growing Workforce.” Twitter, 10 Sept. 2022, https://twitter.com/LauraKellyKS/status/1568635403631992832.

In these tweets, Laura Kelly makes the same mistake that many make: Overstating, and vastly so, the importance of agriculture in Kansas. It’s a larger share of the Kansas economy than it is in most states and the nation, but it is far from the dominant industry.

Consider agriculture as a percent of total economic output (Gross Domestic Product) as shown in nearby chart 1. For the period 1997 through 2020, agriculture accounted for 3.45 percent of Kansas output. For the entire United States, it was 1.03 percent. Other indicators such as farm income (chart 2) and farm proprietors’ income (chart 3) show a similar pattern. (Click charts for larger versions.) 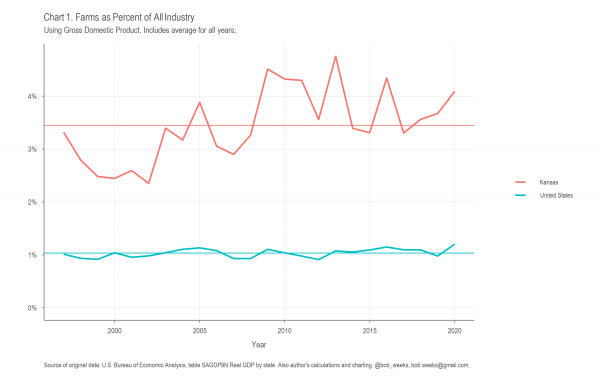 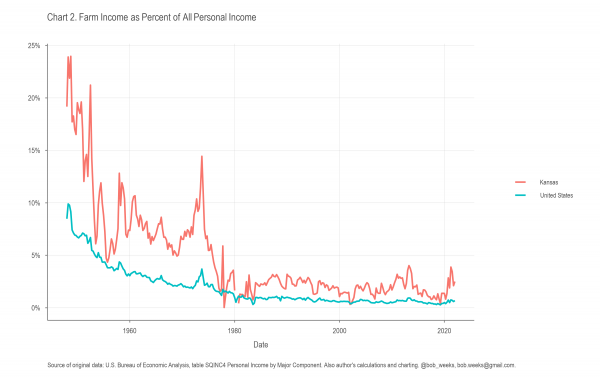 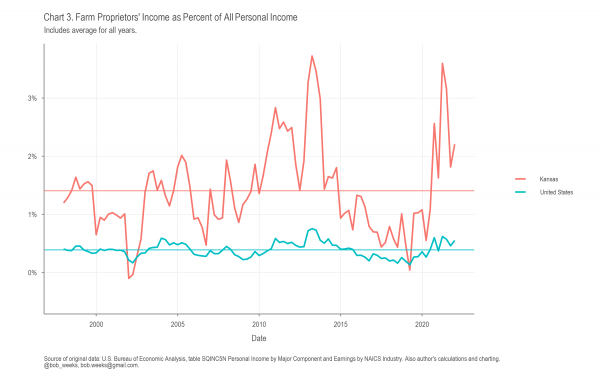 Manufacturing is the most important industry in Kansas, based on industry groups used by the Bureau of Economic Analysis, an agency of the United States Department of Commerce. That is the agency that produces the official GDP data. Chart 5b shows the percent of GDP each industry contributes. Besides Kansas, the chart includes Plains states and the nation. Since 2010, Agriculture has accounted for a little more than four percent for Kansas and the Plains states. It is 1.2 percent for the nation. 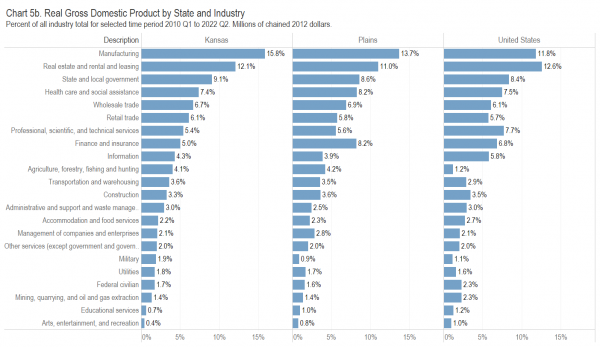 So yes, agriculture is much more important to Kansas than to the nation. But it is just four percent of the economy, and there are eight industry groups with shares above that.

(Most industries exaggerate their importance, often to improve their chances for government subsidy or favorable regulation. The idea is that the chosen industry generates other economic activity, such as purchasing inputs from suppliers and paying employees who then spend their pay on other things. This concept is absolutely true. But most industries do this, and when we sum all the claimed activity, we get a number several times the actual size of the economy. See my article Kansas agriculture and the economy for a look at these claims.)

What is the harm of exaggerating the importance of agriculture? Is it nothing more than a nostalgic longing for a simpler time when the family farm was — supposedly — the backbone of Kansas?

The problem is making policy decisions using facts that are not true.

Just after posting this article, I received the following email from the Derek Schmidt campaign. The misunderstanding of agriculture knows no party.