In Kansas, you may display a political sign in your yard 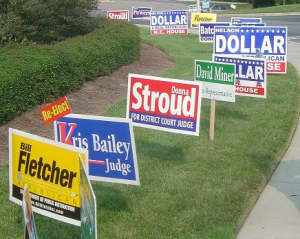 For the August 5, 2014 primary election, the 45 day period in which signs are allowed started on June 21. (Although I could be off by a day. Sometimes lawyers count days in strange ways.)

The bill was the product of then-Senator Phil Journey of Haysville. The bill passed unanimously in both the Kansas House and Senate.

According to the First Amendment Center, some 50 million people live in neighborhoods with homeowners associations. And laws like the 2008 Kansas law are not without controversy, despite the unanimous vote in the Kansas Legislature.

While the U.S. Supreme Court has ruled that governmental entities like cities can’t stop homeowners from displaying political yard signs, a homeowners association is not a government. Instead, it is a group that people voluntarily enter. Generally, when prospective homeowners purchase a home in a neighborhood with restrictive covenants, they are asked to sign a document pledging to comply with the provisions in the covenants. If those covenants prohibit political yard signs, but a Kansas law says these covenants do not apply, what should a homeowner do? Should state law trump private contracts in cases like this?

Practically: Should you display signs in your yard?

While Kansas law makes it legal for those living in communities with covenants that prohibit political yard signs, residents may want to observe these convents. Here’s why: If neighbors are not aware of this new Kansas law and therefore wrongfully believe that the yard signs are not allowed in your neighborhood, they may think residents with signs in their yards are violating the covenants. By extension, this could reflect poorly on the candidates that are being promoted.

Those who are not aware of the law allowing yard signs are uninformed. Or, they may be aware of the law but disagree with it and wish their neighbors would not display political yard signs. These people, of course, may vote and influence others how to vote. Whether to display yard signs in a covenant neighborhood is a judgment that each person will have to make for themselves.

K.S.A. 58-3820. Restrictive covenants; political yard signs; limitations. (a) On and after the effective date of this act, any provision of a restrictive covenant which prohibits the display of political yard signs, which are less than six square feet, during a period commencing 45 days before an election and ending two days after the election is hereby declared to be against public policy and such provision shall be void and unenforceable.

(b) The provisions of this section shall apply to any restrictive covenant in existence on the effective date of this act.

Or, as described in the 2008 Summary of Legislation: “The bill invalidates any provision of a restrictive covenant prohibiting the display of political yard signs, which are less than six square feet, 45 days before an election or two days after the election.”