A look at ranked-choice voting and how it might have worked in the Kansas Republican gubernatorial primary election in August 2018.

Most elections in America utilize plurality voting. Wikipedia explains: “Plurality voting is an electoral system in which each voter is allowed to vote for only one candidate, and the candidate who polls the most among their counterparts (a plurality) is elected. In a system based on single-member districts, it may be called first-past-the-post (FPTP), single-choice voting, simple plurality or relative/simple majority.” 1

Consider the recent primary election for the Republican party nomination for Kansas governor. It was close, with Governor Colyer at 40.513% of the vote and Secretary of State Kris Kobach at 40.622%. With 316,437 votes having been cast, the difference is like one vote out of every 372 votes cast.

In a close election like this, there is intense campaigning, not only among the candidates, but also among their supporters. If there are more than two candidates — there were seven in this contest — campaigning may consist of persuading voters that if you don’t vote for my candidate, you’re just throwing your vote away. Other strategic voting arguments may be made. There is, however, a way to let everyone vote for who they really like.

Simplify just a bit. Suppose there were three candidates: Jim Barnett, Jeff Colyer, and Kris Kobach. On the political landscape, Barnett is a (self-described, I believe) moderate. Kobach is far to the conservative spectrum. Colyer is somewhere between the two, at least according to Kobach supporters, as they regularly slam Colyer for not being conservative enough (whatever that means).

In the pre-election polls Barnett showed much less support than Colyer or Kobach. Also, conventional wisdom was that Barnett and Colyer are more like each other than either is like Kobach.

So, in a regular election, called a plurality election, how do voters decide? No doubt some voters prefer a specific candidate and would not consider voting for anyone else. Other voters may not be as committed, or are willing to express multiple preferences.

As an example, suppose the preferences of voters — the true preference in their heart of hearts, without any thought of strategic voting, just who they really want to be governor — looks like this:

Who wins this election, if every voter votes their true preference? Kobach.

This type of strategic voting is what the Colyer campaign recommended. A Colyer television ad advised ““A vote for [Jim Barnett or Ken Selzer] is essentially a vote for Kris Kobach, increasing his chance of victory” 2 Evidently, the Colyer campaign believed that the anti-Kobach vote is larger than the pro-Kobach vote, but is split between two candidates, with neither of them individually having more support than Kobach. (Ignore Ken Selzer for a moment, please.)

So what if you prefer Barnett and really dislike Kobach? Do you vote your true preference, or do you vote strategically to deny Kobach the victory? Will that strategy really work? Why can’t I vote for someone rather than against someone?

Your ballot instructions state “Select one candidate only.” But suppose the instructions were “Rank these candidates in order of preference, with 1 meaning most-preferred.” You might mark your ballot like this:

This voter is saying something like this: “I really like Jim Barnett, but if he doesn’t get a majority of votes, I prefer Jeff Colyer over Kris Kobach.”

First, because Barnett has the lowest number of first preferences, he is eliminated from the contest.

Then, the counters look at Barnett voters’ second preferences, either Colyer or Kobach, and assign votes accordingly. In the example ballot above, the voter selected Colyer as his second preference. Therefore, that vote is transferred from Barnett to Colyer. If the voter had ranked Kobach second, the vote would have been transferred to Kobach.

In this example, since there are just three candidates, after the Barnett votes are transferred to Colyer or Kobach, the vote-counting is over and there is a winner, or a tie. (If a contest has just two candidates, there is no need for ranked-choice voting, unless there is an alternative to vote for “none of the above.”)

Who would win in this example? If it true that Barnett is more like Colyer than Kobach, it is likely that Barnett voters mostly ranked Colyer as their second preference. So Colyer would have a majority, and wins.

The actual situation in the Kansas Republican gubernatorial primary was more complex, with seven candidates. But ranked-choice voting works the same, although it may take several rounds of counting to determine the winner.

The results of the Republican party primary are nearby. As you can see, the top four candidates received 97.8% of the vote. Were votes for candidates other than Colyer or Kobach wasted votes? What if those who voted for Barnett, Selzer, Kucera, Ruzich, or Tutera had been able to indicate their second preference? 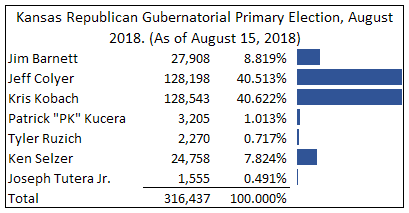 In the Kansas primary there were other major contests with multiple candidates: House of Representatives District 2 for Republicans, House of Representatives District 3 for Democrats, and governor for Republicans and Democrats. Looking forward to the general election, there will be five candidates for governor, one each from the Democratic, Libertarian, and Republican parties, and two independents.