The Wichita Regional Chamber of Commerce PAC dedicates a large portion of its spending on placing its crony in office.

There is an updated version of this containing data from new reports. Click here.

In the contest for Sedgwick County Commission District 4, the Wichita Chamber of Commerce is spending heavily on one candidate.

Through its political action committee, the Chamber has spent $39,925 on political candidates through July 26 of this year. (There could be more spending before the August 7 primary. We don’t know.)

Of that, $31,442 was spent in favor of one candidate, Hugh Nicks. (The Chamber PAC’s finance report designates these expenditures as in favor of Nicks.)

That’s 78.8 percent spent on one candidate. 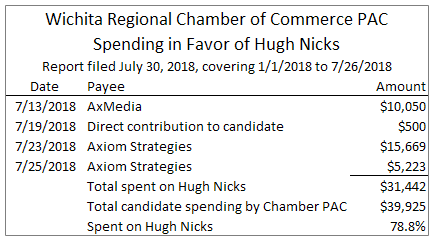 Besides the spending on Nicks, the Chamber PAC sent money to legislative and statewide candidates. Most contributions were for $500, with the most notable exception being Governor Jeff Colyer at $2,000.

Really, the Chamber’s spending hasn’t been so much in favor of Hugh Nicks as it has been against his opponent Richard Ranzau.

And this campaigning by the chamber has been largely based on outright lies and farcical leaps of logic regarding Ranzau’s record. Their record is documented on the pages of Voice for Liberty.

We’d like to be able to trust the Wichita Chamber of Commerce. We want to trust our business and civic leaders. We want the Chamber and its surrogates and affiliates like Greater Wichita Partnership to succeed in building the Wichita economy.

But the Chamber is shaming itself in this campaign, and spending a lot of money to do that.

It would be one thing if the Chamber and its surrogates were successful in economic development efforts in the region. But if you’ve been following analyst James Chung — and it seems like everyone has — he’s delivered a sobering message: The Wichita economy has not been growing. “[Wichita has been] stuck in neutral for about three decades, with basically no growth, amidst the landscape of a growing U.S. economy,” he said. (In fact, in 2016 the Wichita economy shrank from the previous year, and numbers for 2017 don’t look much better.)

Chung says we need to change our ways. In his June visit he said, and the Chung Report wrote, “Every market signal points to the same conclusion: The manner in which Wichita is operating during this critical point in our history is just not working.”

When James Chung (and others) says our manner of operation is not working, it’s the Wichita Chamber of Commerce and its ecosystem that must assume a large portion of blame.

Having failed the people of Wichita, now we know just how much the Chamber wants to put Hugh Nicks on the Sedgwick County Commission.