Huelskamp, Pompeo at top of Club for Growth scorecard

Kansans Tim Huelskamp and Mike Pompeo are among the eight U.S. House Members who scored 100 percent for 2014 on Club for Growth’s scorecard. 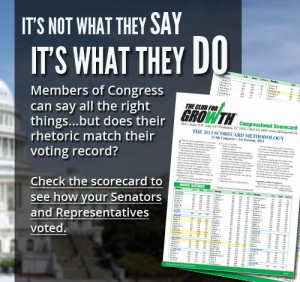 Club for Growth describes itself as “a national network of over 100,000 pro-growth, limited government Americans who share in the belief that prosperity and opportunity come from economic freedom.”

On the scorecard for 2014, released today, Kansas Representatives Tim Huelskamp and Mike Pompeo voted with the Club for Growth’s preferred position one hundred percent of the time. So did six other members of the House of Representatives.

Kansans Lynn Jenkins and Kevin Yoder were tied at rank 73, with scores of 77.