An interactive visualization of real personal income in metropolitan areas.

BEA provides these values as real, meaning adjusted for inflation. These values are in 2012 dollars. Data ranges from 2008 to 2020.

Besides adjusting for the effects of overall inflation, BEA also adjusts these figures for regional price parity. This accounts for differences in prices in different regions of the nation.

BEA supplies this definition: “Personal income is the income received by, or on behalf of, all persons from all sources: from participation as laborers in production, from owning a home or unincorporated business, from the ownership of financial assets, and from government and business in the form of transfer receipts. It includes income from domestic sources as well as from the rest of the world. Personal income is the income that is available to persons for consumption expenditures, taxes, interest payments, transfer payments to governments and the rest of the world, or for saving.”

One of the calculations I performed is determining the difference between the value for a metro and the nation. (Actually, the value for all the metropolitan statistical areas. In 2020, metro areas had population of 284 million, which is 86 percent of the national population of 329 million.) The most useful of these is the difference in per capita GDP between a metro and the nation. If this value is zero, the metro produces personal income at the same rate as the nation. This lets us place values in context: If a metro’s difference is negative, it is below the nation.

For illustrating the distribution, I show a box plot, also known as a box-and-whisker plot. It helps illustrate the distribution of the data. The line in the box shows the median value. Half the values lie above the median and half below. It is not the same as the average (mean) value, although it is often close. The box covers the middle 50 percent of the data. The bottom of the box (sometimes called a hinge), therefore, indicates the twenty-fifth percentile, and the top, the seventh-fifth. The “whiskers” indicate — usually — a range that is 1.5 times the interquartile range. Values lying outside this range are typically considered outliers and may appear as dots.

In the visualization, controls allow for sorting the metros in several ways and selecting years.

The news release from BEA for this release is here. 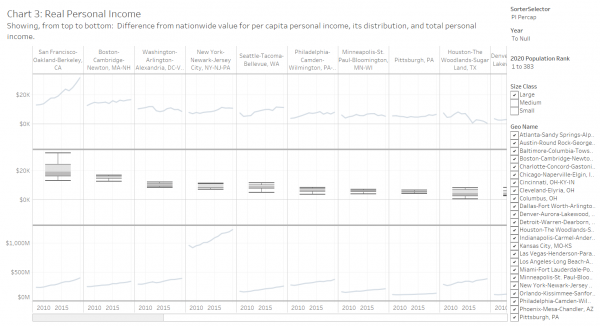 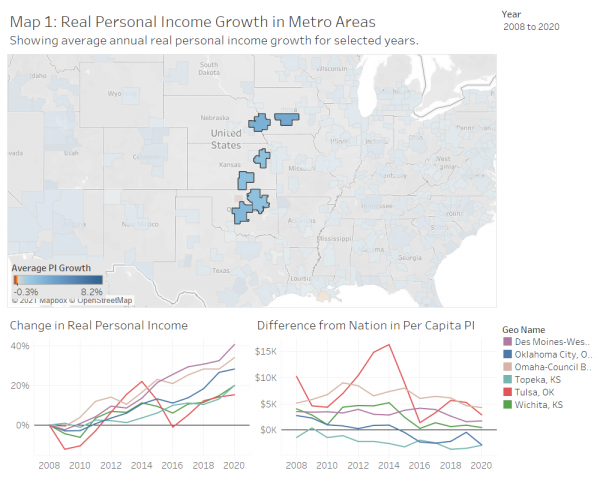