To examine the record of presidents regarding economics, I gathered data from several sources and present it here as an interactive visualization. It holds about 45,000 observations of 71 variables. One of the most interesting views of this data is a timeline chart showing the value of a statistic by month for each president, as can be seen below. (Click for larger version.) 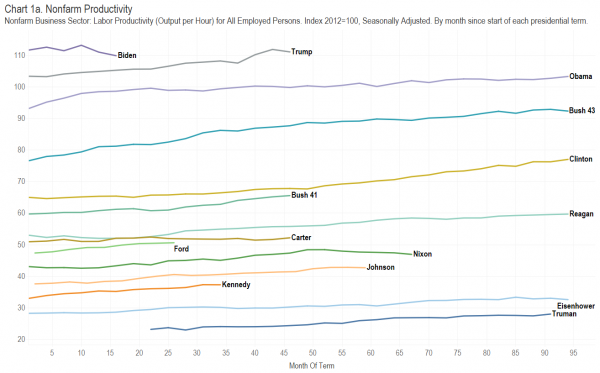 The extent to which presidents have influence or control over these matters is unknown. Opinions vary.

Here is a description of data that appears.

Probably the most important data shown in this visualization is all employees working at nonfarm jobs, seasonally adjusted. Data is shown in thousands of jobs. Nonfarm jobs is the statistic most commonly used when measuring the growth or contraction of employment.

The civilian noninstitutional population, in this visualization, consists of persons age 16 and over, and does not include those in institutions (for example, a correctional institution, a residential nursing home, or a mental health care facility) and those on active duty in the Armed Forces.

The unemployment rate is the number of unemployed persons divided by the civilian labor force.

This data is from the Bureau of Labor Statistics, part of the United States Department of Labor.

For this visualization, I used the average closing price of the Dow Jones Industrial Average for each trading day in a month.

For inflation, I use the Consumer Price Index, specifically the all items in U.S. city average, all urban consumers, seasonally adjusted, with base period 1982-84=100. This data comes from the Bureau of Labor Statistics. CPI is the statistic most commonly cited when measuring inflation.

For Gross Domestic Product, I use data from the Bureau of Economic Analysis is an agency of the United States Department of Commerce.

The GDP series I use is in real dollars, meaning the effects of inflation are removed. This data is produced quarterly.

GDP is the most common statistic cited when measuring the size and growth of economies.

This is the BEA series Real Personal Consumption Expenditures by Major Type of Product, Quantity Indexes, for all expenditures. This series consists of index numbers, with 2012 = 100. It is seasonally adjusted and produced quarterly.

This is an index of measure of how people view the economy. It is an index, with 1966:Q1 = 100, and is not seasonally adjusted. It is produced by the Survey Research Center, under the direction of Richard T. Curtin, at the University of Michigan. The Center says:

The Surveys of Consumers have proven to be an accurate indicator of the future course of the national economy. The Index of Consumer Expectations, produced by the Surveys of Consumers, is included in the Leading Indicator Composite Index published by the U.S. Department of Commerce, Bureau of Economic Analysis. The inclusion of data from the Surveys of Consumers by the Commerce Department is a significant confirmation of its capabilities for understanding and forecasting changes in the national economy. Each series included in the composite Index of Leading Indicators is selected because of its performance on six important characteristics: economic significance, statistical adequacy, consistency of timing at business cycle peaks and troughs, conformity to business expansions and contractions, smoothness, and prompt availability. No other consumer survey meets these rigorous criteria.

Prime Loan Rate: Averages of daily figures of rates posted by a majority of top 25 (by assets in domestic offices) insured U.S.-chartered commercial banks. Prime is one of several base rates used by banks to price short-term business loans. Citation is Board of Governors of the Federal Reserve System (US), Bank Prime Loan Rate [MPRIME], retrieved from FRED, Federal Reserve Bank of St. Louis; https://fred.stlouisfed.org/series/MPRIME.

Citation is Board of Governors of the Federal Reserve System (US), Effective Federal Funds Rate [FEDFUNDS], retrieved from FRED, Federal Reserve Bank of St. Louis; https://fred.stlouisfed.org/series/FEDFUNDS.

This is Primary Energy Net Imports from the primary energy overview, from U.S. Energy Information Administration. Primary energy is “Energy in the form that it is first accounted for in a statistical energy balance, before any transformation to secondary or tertiary forms of energy. For example, coal can be converted to synthetic gas, which can be converted to electricity; in this example, coal is primary energy, synthetic gas is secondary energy, and electricity is tertiary energy.” See http://www.eia.gov/totalenergy/data/monthly/#summary

The Federal Reserve Bank of Philadelphia calculates two indexes that track and forecast economic activity in the states and the country as a whole. The coincident index is a measure of current and past economic activity for each state. The average value for the complete year 2007 is given the value 100. The leading index predicts the six-month growth rate of the state’s coincident index. Positive values mean the coincident index is expected to rise in the future six months, while negative values mean it is expected to fall.

For more about these indexes, and for a visualization of these for each state, see Visualization: Economic indicators in the states.

This is an index produced by the Federal Reserve Bank of Philadelphia. The authors explain:

The Partisan Conflict Index tracks the degree of political disagreement among U.S. politicians at the federal level by measuring the frequency of newspaper articles reporting disagreement in a given month. Higher index values indicate greater conflict among political parties, Congress, and the President.

The index is an outgrowth of recent Federal Reserve Bank of Philadelphia research that finds that the index tends to increase near elections and during debates over such contentious policies as the debt ceiling and health-care reform. Research suggests that increased partisan conflict increases uncertainty among firms and households. Such uncertainty has been shown to slow economic activity by delaying business investment and consumer spending.

For each president, data is presented by month, with the first month of each president’s term having number one. Presidents that served two full terms have data up to month 96 of their term, while others have fewer months.

Data is shown in several views:

For most views, you may select a range of months and which presidents appear.

Most data starts with the Truman administration in April 1945.

Data may be monthly, quarterly, or annual, depending on availability from sources.

Assigning a range of months, quarters, or years to each presidential term requires making a few judgments. For example, when a new president takes office on January 20, should that month be assigned to the new president or the predecessor? Whatever decision is made, it doesn’t have much effect on the broad trends. For the table of presidents and terms that I used, click here.