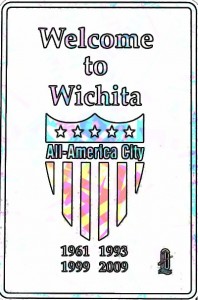 The Wichita City Council will consider adding a 2.75 percent tax to hotel bills, calling it a “City Tourism Fee.” Welcome to Wichita!

This week the Wichita City Council will consider advancing the formation of a Tourism Business Improvement District (TBID).

The main characteristic of the proposed TBID is that it will add 2.75 percent fee to most hotel rooms sold in the City of Wichita. The funds would go to Go Wichita Convention and Visitors Bureau to be used to enhance Go Wichita’s market efforts. The cost of the effort is estimated at $2.5 million per year. The item the city council will consider Tuesday will set a date for a public hearing, if the council agrees to proceed.

What is the motivation of the city’s hotel operators to assent to this added tax on their product? City documents state: “Go Wichita estimates that the new marketing investment could result in a 6% rise in hotel occupancy and a growth of $12 million in hotel revenue.”

First: If it’s true that increased marketing of Wichita’s hotels will result in increased business, who is in the best position to undertake this effort? Hotel operators themselves, or the government bureaucrats that staff tourism bureaus?

Second: The proposal indicates that hotels will collect this money via an item on the bill that will be called the “City Tourism Fee.” I wonder: Is there any way to distinguish this “fee” from a tax? Not only that, but a tax that will explicitly be passed along to visitors to Wichita?

It would be one thing if the city required hotels to remit 2.75 percent of their revenue to the TBID. It’s another matter for the city to levy a fee for the privilege of staying in a hotel room in Wichita and list it on hotel bills. There’s nothing like saying “thank you” for visiting Wichita by adding 2.75 percent to your hotel costs.

There will be quite a bit of tax on a Wichita hotel bill if the TBID is implemented. Start with 7.15 percent sales tax. Add six percent hotel guest tax. Now add 2.75 percent tourism fee. That’s 15.9 percent total tax. Except: If the hotel is one of several located in a Community Improvement Districts, guests may need to add an additional two percent, for a total of 17.9 percent in tax.

But I forgot. Not all of that is tax. Some of it is a only a fee assessed for the privilege of visiting Wichita and staying in a hotel.

Third: This will be more taxpayer funds that are spent in relative secrecy, because it is the position of Go Wichita and the city that the agency doesn’t have to conform to the Kansas Open Records Act.

Fourth: Is there any way to characterize this as anything other than an expansion of bureaucracy in Wichita? I really wonder if the hotel operators know what they’re getting themselves mixed up in. If the hotels feel they need more marketing firepower to attract business to Wichita, I’m sure they’d do better to form a voluntary association to undertake this task. This would be nimble and flexible in way that a government bureaucracy can never be. But who will stand up to this expansion of our tourism bureaucracy? A hotel owner who wishes to receive referrals? Like most government bureaucrats, those who will run this new program “profit” from increasing their power and influence, and by expansion of their budgets, perks, and staffs. They won’t look favorably on those who don’t go along with the program.

Finally, the people of Wichita need to realize that pursuit of convention and tourism business is not a wise path to economic development and prosperity. Wall Street Journal reporting from last year concluded with:

“Mr. Sanders, the University of Texas professor, predicts the glut of convention space will only get worse, because a number of cities continue to push expansions. He blames cities’ hired consultants, who he said predict “all these people are going to come and do wonderful things to your economy.”

“But the problem is they aren’t coming anymore, because there are lots of other convention centers … that desperately want that business,” he said. “So Atlanta steals from Boston, Orlando steals from Chicago and Las Vegas steals from everywhere.”

The “Mr. Sanders” referred to in the Journal reporting is Heywood T. Sanders, who is professor in the Department of Public Administration at the University of Texas at San Antonio. He is a noted critic of public efforts to chase convention business for economic development. His 2005 report report Space Available: The Realities of Convention Centers as Economic Development Strategy was published by the left-leaning think tank The Brookings Institution. It provides a look at the realities of the convention trade.

Sanders writes that convention center business has been on the decline, and it started well before the terrorist attacks in 2001. In a section titled “Trends: Portrait of a Faltering Industry” we can read that attendance is down, exhibit space demand is down, and hotel room demand in cities has fallen too.

The author notes that the decline in convention business is a structural decline: “[Reasons for decline] are the product of industry consolidation, particularly in the hardware and home improvement industry, reductions in business travel in the face of increasing cost and difficulty, and alternative means of conveying and gathering information.” These are not cyclical trends that are likely to reverse in the future.

Despite shrinking demand, cities are building more convention space: “Despite diminishing demand, the last few years have seen a remarkable boom in the volume of exhibit space in U. S. convention centers.” The building of larger convention centers in many cities means that more cities are able to host the larger events, or, cities can now host several smaller events simultaneously. The result, says the author, is fierce competition for both large and small events.

What about the costs? The author introduces a section on costs with: “The studies that justify both the new center space and the publicly-owned hotels paint a picture of tens of thousands of new out-of-town visitors and millions of dollars in economic impact. Despite that rhetoric, these projects carry real risks and larger potential costs, particularly in an uncertain and highly competitive environment.”

The convention center is just the start of costs: “A new [convention] center is thus often followed by a subsidized or fully publicly-owned hotel.” Wichita, of course, has a fully publicly-owned hotel, the large 303-room Hyatt. Now Wichita has been providing, and will probably continue, subsidy programs to other downtown hotels. None of the hotels alone provide as many rooms as Wichita convention planners say the city needs, so we are likely to see proposals for a subsidies to hotels continue.

In fact, until Wichita has as many hotel rooms as our nation’s largest convention cities have, there is always a larger goal — a next step on the ladder. Can you imagine our city leaders ever proclaiming that we have enough hotel rooms in downtown Wichita?

Other things Sanders says that are likely to be proposed are a sports arena. Wichita, of course, recently opened a taxpayer-financed and government-owned facility, the Intrust Bank Arena. After a brief honeymoon fling with good financial performance, the arena has settled down to a less-acceptable level of revenue production. Residents of Sedgwick County, which owns the arena, should be cautioned that the financial results hailed by the county don’t include depreciation costs, so the true financial picture is not anywhere near complete.

Entertainment, retail, and cultural attractions are often proposed, Sanders writes, and Wichita downtown planners have indicated their desire for these.

The conclusion to this paper describes Wichita’s current situation and foreshadows what is likely for the future of Wichita:

But if taxing, spending, and building have been successful, the performance and results of that investment have been decidedly less so. Existing convention centers have seen their business evaporate, while new centers and expansions are delivering remarkably little in terms of attendance and activity.

What is even more striking, in city after city, is that the new private investment and development that these centers were supposed to spur — and the associated thousands of new visitors — has simply not occurred. Rather, city and convention bureau officials now argue that cities need more space, and more convenience, to lure those promised conventions. And so underperforming convention centers now must be redeemed by public investment and ownership of big new hotels. When those hotels fail to deliver the promises, then the excuse is that more attractions, or more retail shops, or even more convention center space will be needed to achieve the goal of thousands of new visitors.