With tax exemptions, what message does Wichita send to existing landlords?

As the City of Wichita prepares to grant special tax status to another new industrial building, existing landlords must be wondering why they struggle to stay in business when city hall sets up subsidized competitors with new buildings and a large cost advantage. From June 2014.

Tomorrow the Wichita City Council considers whether to grant property and sales tax exemptions to a proposed speculative industrial building in north central Wichita. If approved, this will be the second project undertaken under new economic development policies that allow for this type of tax exemption.

City documents estimate that the property tax savings for the first year will be $312,055. This exemption will be granted for five years, with a second five year period possible if performance goals are met.

The city documents also state that the project will also apply for a sales tax exemption, but no estimate of these tax savings are given. It’s common for a project of this type to have about half its cost in purchases subject to sales tax. With “site work and building” at $10,350,000, sales tax in Wichita on half that amount is $370,012. Undoubtedly a rough estimate, it nonetheless gives an idea of how much sales tax the developers will avoid paying.

(If city hall has its way, the sales tax in Wichita will soon increase by one cent per dollar, meaning the developers of this project would save $421,762 in sales tax. While others will hurry to make purchases before the higher sales tax rate takes effect — if it does — these developers will be in no hurry. Their sales tax is locked in at zero percent. In fact, once having a sales tax or property tax exemption, these developers are now in a position to root for higher sales and property tax rates, as that increases costs for their competitors, thereby giving these tax-exempt developers a competitive advantage.)

City documents give the benefit-cost ratios for the city and overlapping jurisdictions:

It’s not known whether these ratios include the sales tax forgiveness. 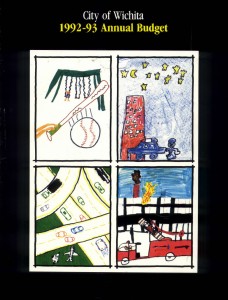 While the City of Wichita insists that projects show a benefit-cost ratio of 1.3 to one or better (although there are many exceptions), it doesn’t apply that standard for overlapping jurisdictions. Here, Sedgwick County experiences a benefit-cost ratio of 1.18 to one, and the Wichita school district (USD 259) 1.00 to one. These two governmental bodies have no input on the decision the city is making on their behalf. The school district’s share of the forgiven taxes is 47.4 percent.

When the city granted a similar tax exemption to a speculative warehouse in southwest Wichita, my estimates were that its landlord has a cost advantage of about 20 percent over other property owners. Existing industrial landlords in Wichita — especially those with available space to rent and those who may lose tenants to this new building — must be wondering why they struggle to stay in business when city hall sets up subsidized competitors with new buildings and a large cost advantage.

Property taxes in Wichita are high for industrial buildings, and even higher for commercial buildings. See Wichita property taxes compared. So it’s difficult to blame developers for seeking relief. But instead of offering tax relief to those who ask and to those city hall approves of, it would be better to have lower taxes for everyone.

The targeted economic development efforts of governments like Wichita fail for several reasons. First is the knowledge problem, in that government simply does not know which companies are worthy of public investment. In the case of the Wichita, do we really know which industries should be targeted? Is 1.3 to one really the benchmark we should seek, or would we be better off by insisting on 1.4 to one? Or should we relax the requirement to 1.2 to one so that more projects might qualify?

This assumes that these benefit-costs ratios have validity. This is far from certain, as follows: