A Kansas policy institution asks Kansans whether they support more school funding. But surveys in Kansas and nationwide have found that citizens are woefully uninformed on the level of school spending, usually guessing far below the actual level.

The Docking Institute at Fort Hays State University released survey results last week purporting that Kansans think school funding should be increased, but that “finding” is based on a flawed survey concept.

Experienced pollsters know that responses to questions such as “should funding for Kansas schools increase, decrease or remain the same” are only as valid as respondents’ grasp of the underlying facts. If, for example, citizens believe school funding is half or less than is actually provided, and if they’ve repeatedly (and falsely) been told that funding has been cut, it is quite predictable that many might say funding should be increased.

Survey after survey has shown that Kansans are woefully misinformed on school funding. 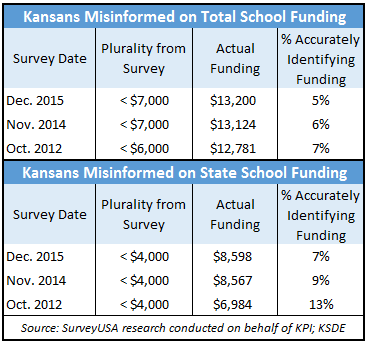 Kansas Policy Institute commissioned three surveys over the years and each time, the leading response (plurality) for total funding and state funding of schools was roughly 50% less than districts actually received that year and very few people knew the actual funding level. Of course, one cannot blame citizens for being misinformed given that media, school districts and other special interests have carpet-bombed the state with false claims of funding reductions and implications that actual funding levels were much lower than reality. And those propaganda efforts were working; note that a smaller percentage of Kansans could accurately identify the real funding levels with each successive survey.

Injecting some reality into the survey produces quite different results. The Docking survey said 77 percent of Kansans believe school funding should be increased, but the December 2015 SurveyUSA poll found that the majority of Kansans would not be willing to pay higher taxes for school funding (see Question #12). That finding was consistent across all geographic lines and with conservatives; self-identified moderates were willing to pay higher taxes but liberals were almost evenly split.

It’s no secret that Kansans are horribly misinformed on school funding, so media and special interests are well aware that simply asking Kansans whether school funding should be increased will predictably produce invalid results. But that won’t stop them from touting the misleading Docking results.