Thus is the opinion, filed December 30, 2014, from the Shawnee County District Court three-judge panel as tasked by the Kansas Supreme Court pursuant to their decision in Gannon v. Kansas in March of 2014.

We reported in a previous KPI blog that the unspecified underfunding of K-12 public education in Kansas identified in this decision is at least $548 million. The judges based their opinion on several categories of adequacy they deemed relevant to the case. One such category in the decision is entitled Adequacy As A Matter Of Student Performance (pp. 20-48). The judges included as its linchpin evidence an interview with Kansas City, Kansas USD 500 superintendent Dr. Cynthia Lane. Dr. Lane provided testimony regarding how a federal grant enabled Emerson Elementary, a USD 500 school, to significantly increase student performance.

In short, Emerson Elementary is a small K-5 school. Several years ago, it gained notoriety for being declared the lowest performing elementary school in Kansas. As such, it was awarded a School Improvement Grant (SIG) from KSDE, authorized by the No Child Left Behind law. The school was given nearly $3 million over a three-year period (2010-11 to 2012-13 school years) to improve state assessment test scores. Dr. Lane testified that “fewer than 30 percent” of the students met state standards in math and reading prior to receiving the grant. According to demographic data published by KSDE, Emerson has about 95% economically disadvantaged students. While Dr. Lane testified that Emerson is ethnically “about 50 percent African American and about 48 percent Hispanic,” KSDE reported that the ethnic breakdown is about two-thirds Hispanic, one-quarter African American and less than 10% white. She told the court that over the life of the grant Emerson’s students performed “on both the reading and math state assessment to have more than 85 percent … meeting or exceeding expectations just in the last three years. It’s a remarkable story.”

Given the continuing grade advancement and migration upwards of K-12 schoolers during their school careers, it seems but obvious that for educational advancement, much less the maintenance of results accomplished prior with the earlier funding initiatives implemented, but now abandoned, that the revenue streams which supported those results in that period of favorable funding needed to be continued to be provided in order to properly educate the continuing stream of new faces going forward, either initially entering the school system or advancing in grade. No evidence or proffer of evidence supports otherwise. (pp. 39-40, emphasis not added)

Translated: More money = greater student achievement, and there is no evidence to the contrary.

I will now proffer contrary evidence, a much less remarkable story that should have been proffered in the original court case: Northwest Middle School.

The same year Emerson Elementary was awarded its SIG, another USD 500 school, Northwest Middle School, was awarded a similar grant with a higher amount of $4.77 million. Northwest has similar minority and economically disadvantaged populations to Emerson Elementary (just over half African American and just over one-third Hispanic and 98% low income). But the outcomes pursuant to the SIG were very much dissimilar, indeed.

The following table and the accompanying graph show how Northwest Middle School scored on the state reading and math assessments for the three years prior to receiving the SIG and during the three-year implementation of the grant.

As the graphics show, achievement at Northwest had an uptick in both math and reading the first year of the grant, but then fell off dramatically the following two years. To put their performance in perspective the following graphs compare Northwest to Rosedale Middle School (the USD 500 school most comparable to Northwest according to KSDE) and the USD 500 district as a whole. 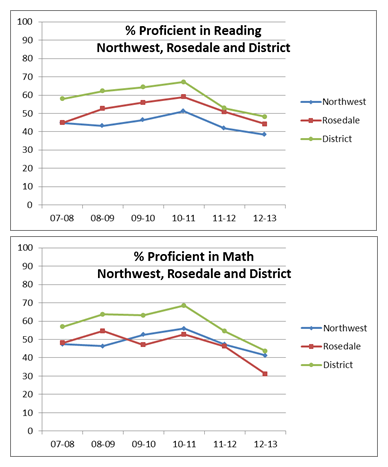 In reading, Northwest underperformed both Rosedale (which did not get a SIG) and the district as a whole both prior to and after receiving the grant. The trend and gap between Northwest and Rosedale remained amazingly consistent throughout this period. The picture in math is a little different. Northwest students maintained a slight advantage over Rosedale throughout the grant period and nearly eliminated the gap with the district as a whole. However, the overall trend is downward, with just over 40% of the Northwest middle schoolers proficient in math as of the last recorded state assessments.

It is safe to say that in terms of achievement, that $4.77 million granted to Northwest Middle School in Kansas City, Kansas didn’t buy much. This is evidence that, once again, more money does not inherently make a difference in student outcomes. This nationwide study conducted by the Heritage Foundation supports that contention. Even Kansas’s own Legislative Post Audit says in this report (p. 107) that a correlation between increased funding and increased outcomes is inconclusive.

As a 20-year teaching veteran, I know it’s not the money that makes a difference in student achievement. It’s commitment by students, parents, teachers, principals and administrators to make it happen. Trying to quantify that in dollar terms is a fool’s errand. If the increase in education funding prescribed in the most recent Gannon decision were to become a reality, it would mean a nice raise for teachers and likely more administrators, but student outcomes would remain flat and achievement gaps would continue. Think of it as Montoy redux.

Clearly, the judges got it wrong. Let’s hope their decision gets overturned on appeal and an end is put to this seemingly endless carousel of education funding lawsuits. The citizens of Kansas deserve better.