A recent article in the Topeka Capital-Journal complained of the plight of schools in Kansas. Like much reporting we see regarding Kansas schools, the story is incomplete.

One district cited in particular was USD 348, Baldwin City Schools. The story contained “As state aid dwindled.” Let’s look at some actual numbers. 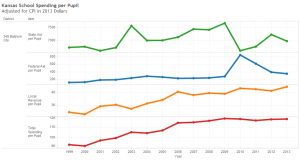 A nearby chart shows the level of spending in this school district for some recent years. The chart holds per-pupil amounts, adjusted for inflation. As the reporter noted, state aid did dwindle. That was during the recent recession, and the federal government increased aid to Kansas schools those years. The result was that total spending barely changed. (Click on the charts for larger versions.)

Looking at levels of employment, we can see from the charts that the number of employees had been declining, but was stable or slightly higher for the most recent year. The ratios of these employees to students was rising, but fell the last year.

It’s often noted that some portion of recent school funding has been increased contributions to KPERS, the teacher retirement system. This funding doesn’t get “into the classroom,” whatever that means. The Baldwin school superintendent told the reporter “I can’t use KPERS to gas up our buses.” That’s true. But he can buy fuel with the money he doesn’t have to spend on teacher retirement benefits.

If the Topeka Capital-Journal wants to do some reporting that will help Kansans understand what is happening in their schools, I suggest starting with the decisions that Kansas school leaders made regarding standards. If the reporter would look at the most recent version of Mapping State Proficiency Standards Onto the NAEP Scales, a report produced by the National Center for Education Statistics, we could learn that at the time when Kansas was spending more on schools due to an order from the Kansas Supreme Court, the state lowered its already low standards for schools. I’ve made it easy: All you have to do is view the illustrative video I made at Why are Kansas school standards so low?