This is why we must eliminate defined-benefit public pensions

Actions considered by the Kansas Legislature demonstrate — again — that governments are not capable of managing defined-benefit pension plans.

The Kansas Legislature is considering a bill that will allow Governor Sam Brownback to defer making payments to KPERS, the state’s defined-benefit pension system for public employees. The deferred payments would be made up in future years, although there is really no mechanism to enforce this.

Also, the bill considers eliminating the requirement that when the state sells surplus property, that 80 percent must be used to reduce the unfunded actuarial pension liability of KPERS. There is also a moratorium on employer contribution to KPERS Death and Disability fund, which is much smaller than the retirement fund. 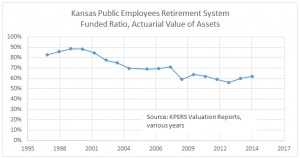 That unfunded liability is a big problem. It refers to the difference between what KPERS expects to pay compared to the revenue it expects to receive. In recent years the Kansas pension fund has been among the worst in the country, based on the funded ratio. The nearby charts shows the trend of this funded ratio through 2014, the latest date for KPERS valuation reports.

Last year the state issued $1 billion in bonds to address a portion of the unfunded liability. While this helps KPERS, it simply means that the state owes another billion dollars on a different balance sheet. But it’s the same taxpayers that will eventually pay.

Barry Poulson, Ph.D., Emeritus Professor at the University of Colorado — Boulder has written on the danger of borrowing to shore up state pension funds. As explained below, there is the “lack of nexus between the investment of the bond proceeds and payments for unfunded liabilities in the plan.” This means that the borrowed funds may be used for current spending rather than for correcting the KPERS unfunded liability.

He further explains: “If legislators see that additional funds are available to pay off unfunded liabilities in the pension plan they may choose to allocate less general fund money to meet these pension obligations.”

This is what is happening in Kansas. The borrowing of a billion dollars has let legislators and the governor feel — incorrectly — that there is breathing room, and that the state can slack off making the contributions it should be making this year. This is highly irresponsible and reckless.