While the City of Wichita asks citizens to inconvenience themselves by saving “vampire” electrical waste, the city still lights up its own monsters.

Last Friday afternoon most downtown Wichita street lights were switched off. But not all, as can be seen by the many lights switched on at the Wichita Transit Center. They were on Friday afternoon, just as they are on many days.

While waste like this is not acceptable, it is all the more striking considering that Wichita’s transit system is out of money. The city council has recommended that Wichitans vote for higher sales taxes, part of which would fund the transit system. That would include, I suppose, the wasteful spending on burning street lights in the middle of the day. This is indicative of the attitude of the city as explained in Forget the vampires. Let’s tackle the real monsters.

So before considering any extra funding for Wichita transit, let’s ask that it stop wasteful spending like these lights. Even better, before sending any funding, let’s stop this waste. 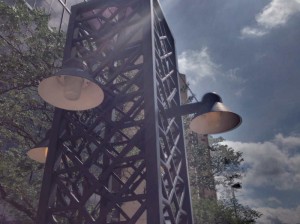 The lights illustrated in this photograph are, undoubtedly, a small portion of the city’s spending. But you don’t have to look very hard to find waste like this, and we know that small examples of waste are multiplied many times. So when city leaders tell us that there is nowhere left to cut in the budget, that everything that can be done to trim the fat has already been done, and that the only thing we can do is raise taxes — well, think of this photograph and others illustrated in Wichita advances in the field of cost savings, Another Friday lunch, and even more lights are on, To compensate, Wichita switched on the street lights, In Wichita, the streetside seating is illuminated very well, In Wichita, the rooftops are well-lit and On a sunny day in downtown Wichita you can see the street lights.

This is not to say that waste like this does not occur in the private sector. Of course it does. But businesses and individuals have a powerful incentive to avoid waste that isn’t present in government: Businesses and people are spending their own money. And even if they waste money, it’s their money, not ours.