Corporate income tax rates in U.S. and other countries

Over the past two decades most large industrial countries have reduced their corporate income tax rates. Two countries, however, stand out from this trend: France and The United States.

In Abolish the Corporate Income Tax economist Laurence J. Kotlikoff writes “I, like many economists, suspect that our corporate income tax is economically self-defeating — hurting workers, not capitalists, and collecting precious little revenue to boot.” 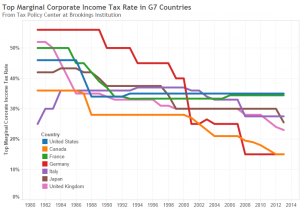 High taxes in America cause companies to invest overseas in order to escape these high American taxes. For example, Apple takes steps to minimize the income tax it pays, as do most companies. In Calculating Apple’s True U.S. Tax Rate law professor Victor Fleischer explains and estimates what rate Apple pays:

The whole point of the Senate hearing was to show how Apple shifts substantial amounts of its economic profits from the United States to Ireland, where they are taxed at a rate close to zero. Those profits are then sheltered in Ireland and untaxed unless Apple decides to bring the cash back to the United States.

These overseas profits create deferred tax liabilities that will not be taxed until the cash is repatriated. But Apple is reluctant to repatriate its overseas cash; it would rather lobby for another tax holiday and bring the cash back tax-free. An added benefit of a tax holiday for Apple is that it would provide a quick jump in reported earnings when the accounting entry for the deferred tax liability is reversed. …

Thus, Apple’s “true U.S. tax rate,” according to my own calculation, was 8.2 percent.

The corporate income tax rate in the United States is 35 percent. So how does Apple pay such a lower rate to the U.S? It locates operations overseas. It earns profits overseas, and pays taxes there.

If corporate tax rates were lowered, we’d see more economic activity here rather than overseas. That would help workers in America, as they can’t easily move their capital and investments overseas to take advantage of lower tax rates. But the wealthy — like Apple’s shareholders — can do that, and they have.