Since the start of the pandemic, has the employment situation in Kansas bounced back?

There is more than one way to evaluate jobs and employment, and depending on the method, Kansas has either recovered from the pandemic or is still behind.

The Bureau of Labor Statistics, part of the United States Department of Labor, publishes two series of employment data that are widely followed.

The Current Population Survey (CPS), counts people who are working and those who are not. It is commonly referred to as the household survey. The Current Employment Statistics (CES) program counts jobs at employers. It is commonly referred to as the employer survey. There are important differences between the two, such as persons being counted as employed once even though they may hold multiple jobs. That’s in the household survey. In the employer survey, a person with two jobs is counted twice.

There are other differences. My article Visualization: Employment measures explains and offers examples of the differences.

The differences between the two surveys can be significant. In the nearby table, I show data from March 2020 (right before the pandemic) and April 2021, the most current data for states.

You can see that based on the employer survey counting jobs, Kansas has fewer now. But counting working people from the household survey, more are working now than before the pandemic.

Which is the correct answer?

In its article Kansas lost private-sector jobs in April, Kansas Policy Institute cites data from April 2020 and April 2021 to show Kansas with 3.6 percent fewer jobs over that period. This conclusion comes from employer survey data.

In Kansas Labor Market Report, April 2021 the Kansas Secretary of Labor made these remarks: “‘We’ve seen significant improvement in the unemployment rate throughout the past year, from a historic high of 12.6 percent in April 2020, down to 3.5 percent just twelve months later,’ said Secretary Amber Shultz. ‘Great progress is being made as we are approaching pre-pandemic unemployment rates.'” This rosy assessment of the Kansas economy is based on data from the household survey.

Neither of these views is incorrect. They’re just looking at different things.

In these examples from my interactive visualization of Kansas employment data, click for larger versions. 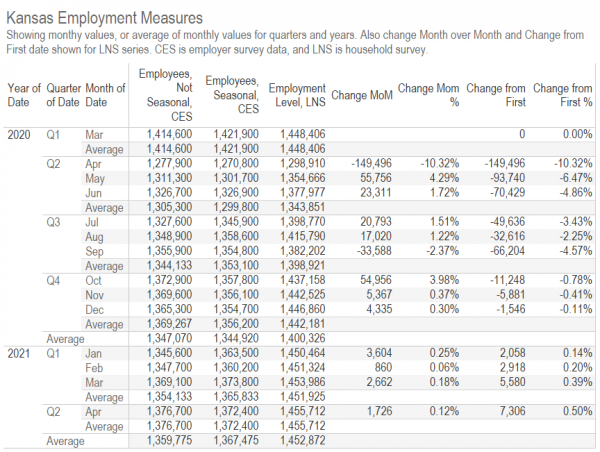 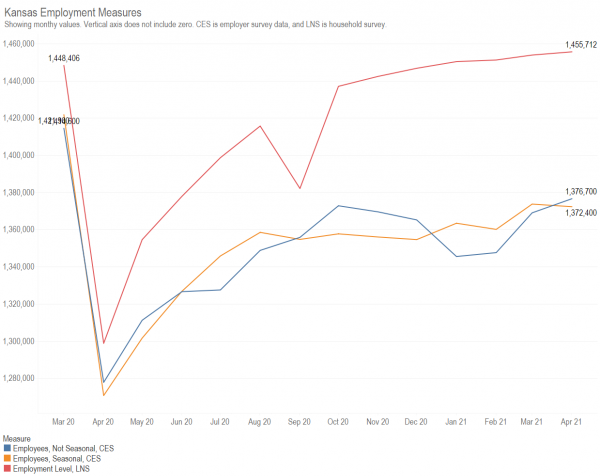