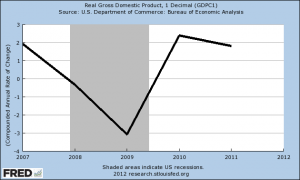 While the United States economy started to grow after the recent recession, the trend in growth is slowing.

This is not trickle-down government, it’s suffocating government, where government threatens to overwhelm the private sector. As government intervenes in more areas of the economy, as Obama’s bureaucrats extend their span of control over the economy (think General Motors), we have a certain process taking place. Charles Koch in September in Wall Street Journal observed: “Put simply, cronyism is remaking American business to be more like government. It is taking our most productive sectors and making them some of our least.”

This didn’t start when Barack Obama assumed office. The process was already in place. But it has accelerated under the current president. Not by accident, but by design.

Most people worry about deficits and debt. But do you think President Obama is truly concerned about huge deficits year after year, with many more predicted? These huge deficits are not a bug in the program. They’re a feature. The point of the deficits is to create a crisis that makes it necessary to raise taxes. Government grows again.

Yes, President Obama inherited a tough economy when he took office nearly four years ago. But, according to the official record-keepers, the recession ended in the summer of 2009. Does it feel like the recession is over?

Do you remember “Recovery Summer?”

Now David Axelrod denies that there was such a claim.

George Will accurately diagnosed the problem two years ago: “We can’t tolerate any more of the Obama cure.”