Economic indicators in the states

During this century the Kansas economy has not kept up with the national economy and most neighboring states.

The Federal Reserve Bank of Philadelphia calculates two indexes that track and forecast economic activity in the states and the country as a whole. 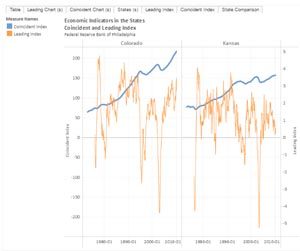 The coincident index is a measure of current and past economic activity for each state. This index includes four indicators: nonfarm payroll employment, the unemployment rate, average hours worked in manufacturing, and wage and salary disbursements deflated by the consumer price index (U.S. city average). July 1992 is given the value 100. 1

The leading index predicts the six-month growth rate of the state’s coincident index. In addition to the coincident index, “the models include other variables that lead the economy: state-level housing permits (1 to 4 units), state initial unemployment insurance claims, delivery times from the Institute for Supply Management (ISM) manufacturing survey, and the interest rate spread between the 10-year Treasury bond and the 3-month Treasury bill.” 2