Is there a relationship between marginal tax rates and tax dollars collected? Not much.

The top marginal tax rate is the rate that applies to most income earned by high-earners. It’s not the same as what is actually paid. This fact is often unknown or ignored when discussing taxes, especially when advocating for higher taxes.

A nearby chart illustrates the lack of relationship between the top marginal income tax rate and the income taxes paid. (Click chart for a larger version.) 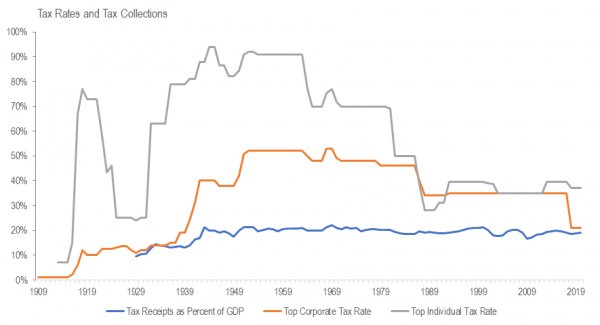 Try as we might, raising tax rates won’t generate higher revenues (as a percentage of gross domestic product), due to Hauser’s law.

W. Kurt Hauser explains in The Wall Street Journal: “Even amoebas learn by trial and error, but some economists and politicians do not. The Obama administration’s budget projections claim that raising taxes on the top 2% of taxpayers, those individuals earning more than $200,000 and couples earning $250,000 or more, will increase revenues to the U.S. Treasury. The empirical evidence suggests otherwise. None of the personal income tax or capital gains tax increases enacted in the post-World War II period has raised the projected tax revenues. Over the past six decades, tax revenues as a percentage of GDP have averaged just under 19% regardless of the top marginal personal income tax rate. The top marginal rate has been as high as 92% (1952-53) and as low as 28% (1988-90). This observation was first reported in an op-ed I wrote for this newspaper in March 1993. A wit later dubbed this ‘Hauser’s Law.'” (1)Hauser, W. Kurt. “There’s No Escaping Hauser’s Law.” The Wall Street Journal, Dow Jones & Company, 26 Nov. 2010. Archived here.

For many people, there is a direct relationship between tax rates and the amount of tax paid. For workers who earn a paycheck, there’s not much they can do to change the timing of their income, find tax shelters, or shift income to capital gains. When income tax rates rise, they have to pay more.

But people with high incomes can use these and other strategies to reduce the taxes they pay. There is an entire industry of accountants and lawyers to help people reduce their taxes. Often — particularly in the past when top marginal rates were very high — investments and transactions were made solely to avoid taxes, not for productive economic benefit.

People react to changes in tax law. As tax rates rise, people seek to reduce their taxable income. The result is often investments in unproductive tax shelters. There is less incentive to work and invest. There is cheating. These are some of the reasons why tax hikes usually don’t generate the promised revenue.

But: High tax rates make the middle class feel better about paying their own taxes. With top tax rates of 90 percent, they may believe that the rich are paying a lot of tax. The middle class may take comfort in the fact that someone else is worse off. But that is based on the misconception that high tax rates mean rich people actually pay correspondingly higher tax.

Data is from the Internal Revenue Service and Bureau of Economic Analysis.