As measured by the Consumer Price Index, inflation jumped in June.

The Consumer Price Index for All Urban Consumers (CPI-U) increased 0.9 percent in June on a seasonally adjusted basis after rising 0.6 percent in May, the U.S. Bureau of Labor Statistics reported today. This was the largest 1-month change since June 2008 when the index rose 1.0 percent. Over the last 12 months, the all items index increased 5.4 percent before seasonal adjustment; this was the largest 12-month increase since a 5.4-percent increase for the period ending August 2008.

U.S. inflation continued to accelerate in June at the fastest pace in 13 years as the recovery from the pandemic gained steam and consumer demand drove up prices for autos, airline fares and other items.

The Labor Department said last month’s consumer-price index increased 5.4% from a year ago, the highest 12-month rate since August 2008. The so-called core price index, which excludes the often volatile categories of food and energy, rose 4.5% from a year before. See Inflation Accelerates Again in June as Economic Recovery Continues.

How do you define transitory? Three months? A year? Or is it two? Inquiring minds want to know after Tuesday’s report that the consumer price index rose 0.9% in June. Consumer prices are now up 5.4% from a year earlier, so what the Federal Reserve means when it dismisses these price increases as “transitory” takes on growing economic and political significance.

The June increase was nearly twice what economic forecasters predicted, which isn’t reassuring. The inflation optimists are dismissing the June increase as the result of “special” factors that are likely to ease. Used car and truck prices rose 10.5% in the month, accounting for about half the increase in core CPI. No doubt vehicle prices won’t keep rising at that rate, but then that’s also what we were told when they rose 10% in April. This won’t reassure the non-affluent Americans who buy used cars. See Powell Gets His Inflation.

A key measure of inflation spiked in June, climbing at the fastest pace in 13 years as prices for used cars, hotel stays and restaurant meals surged while the economy reopens.

The Consumer Price Index jumped by 5.4 percent in the year through June, the Labor Department said on Tuesday, the largest year-over-year gain since 2008 but one that is expected to fade as the economy moves past a volatile reopening period. The Biden administration quickly pointed out that much of the move was tied to temporary supply issues: Prices for previously owned cars and trucks rocketed higher and accounted for more than a third of the increase. See Prices Pop Again, and Fed and White House Seek to Ease Inflation Fears. 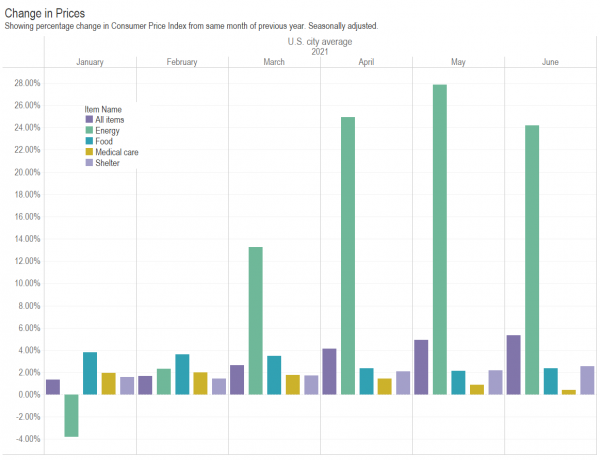 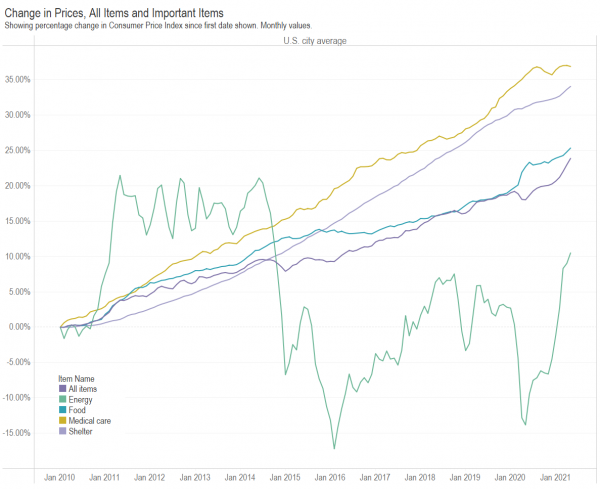