In July 2021, inflation remains high, although the rate fell from June.

As measured by the Consumer Price Index, inflation remained high in July.

The Consumer Price Index for All Urban Consumers (CPI-U) increased 0.5 percent in July on a seasonally adjusted basis after rising 0.9 percent in June, the U.S. Bureau of Labor Statistics reported today. Over the last 12 months, the all items index increased 5.4 percent before seasonal adjustment.

Inflation remained elevated in July as the economic recovery continued, but prices showed evidence of cooling amid pandemic-related supply problems and signs that the recent rise in coronavirus infections is starting to crimp some business activity.

Consumer prices rose 5.4% in July from a year earlier, the same pace as in June, the highest 12-month rate since 2008, the Labor Department reported Wednesday.

On a monthly basis, however, price pressures weakened. The department’s consumer-price index climbed a seasonally adjusted 0.5% in July from June, a significantly slower pace than its 0.9% increase in June from May, though well above the average 0.2% rate from 2000 to 2019. See Inflation Stayed High in July as Economy Rebounded.

The meaning of “transitory” is getting longer all the time. That’s one conclusion from the Labor Department’s report Wednesday for July that consumer prices rose 5.4% over the last 12 months. That’s two months in a row, after a 5% annual increase in May. When does transitory, in the Federal Reserve’s inflation lingo, become persistent?

White House economists looking for silver price linings can note that the monthly increase in the consumer-price index slowed in July to 0.5% compared to 0.9% in June. But the smaller increase was mostly due to used car prices stabilizing somewhat after months of astronomical growth. Inflation rose anyway. See Biden Has an Inflation Problem.

Consumer prices rose at a rapid clip in July as the reopening of the economy kept inflation elevated at levels that are making officials at the Federal Reserve squirm while posing a political problem for the Biden White House.

Prices increased by 5.4 percent last month compared with a year earlier, the Labor Department’s Consumer Price Index showed on Wednesday, matching the prior month’s increase. The gains are beginning to moderate on a monthly basis, but inflation remains much faster than it was before the pandemic. See Consumer Prices Keep Climbing as Fed and White House Await a Cool-Down. 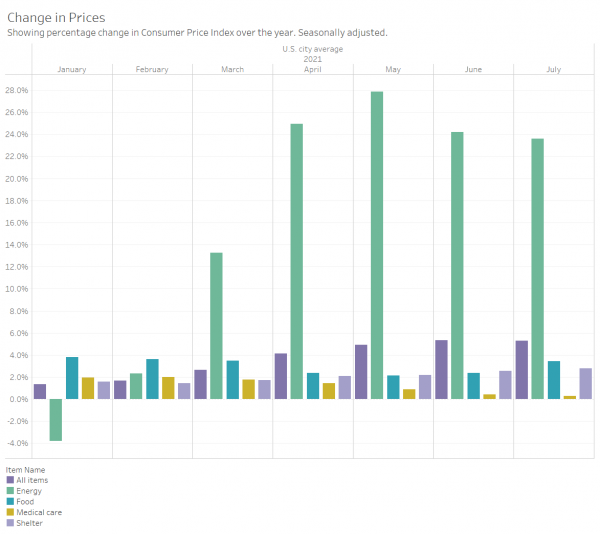 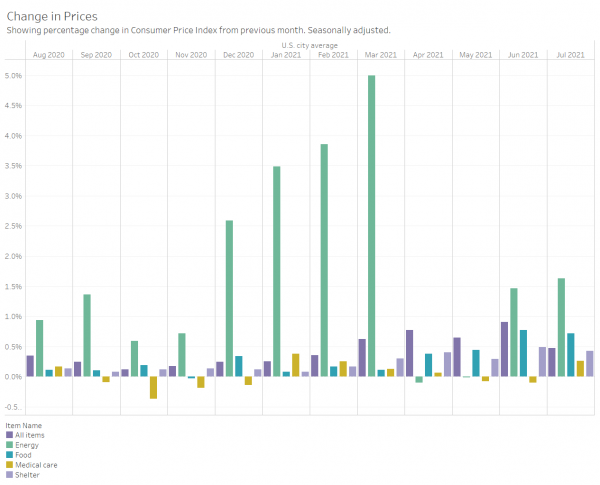 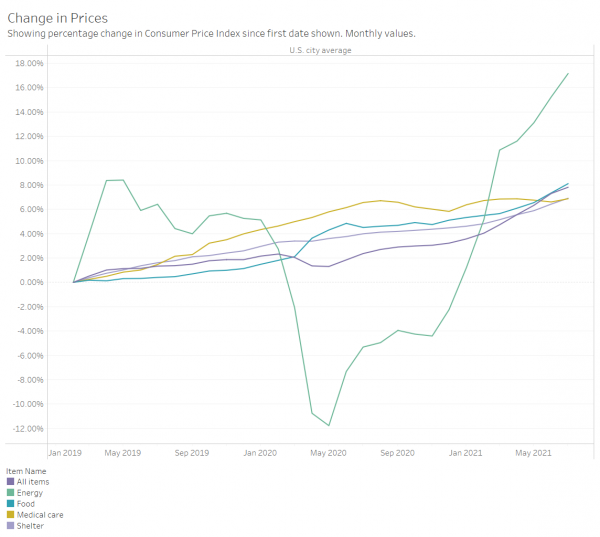