In the second quarter of 2020, the Kansas economy contracted at the annual rate of 30.3 percent, compared to contraction of 3.5 percent in the previous quarter. While GDP fell in all states, Kansas performed better than most, ranking nineteenth.

In the second quarter of 2020, the Kansas economy contracted at the annual rate of 30.3 percent in real (inflation-adjusted) dollars, according to statistics released Friday by Bureau of Economic Analysis, a division of the United States Department of Commerce. GDP for the quarter was at the annual rate of $161,464 million in current dollars, down from $177,917 the previous quarter. The second quarter consists of the months of April, May, and June.

This the second quarter to be affected by the response to the pandemic, as BEA noted in the release accompanying the data:

The decline in second quarter GDP reflected the response to COVID-19, as “stay-at-home” orders issued in March and April were partially lifted in some areas of the country in May and June, and government pandemic assistance payments were distributed to households and businesses. This led to rapid shifts in activity, as businesses and schools continued remote work and consumers and businesses canceled, restricted, or redirected their spending. The full economic effects of the COVID-19 pandemic cannot be quantified in the GDP estimate for the second quarter of 2020 because the impacts are generally embedded in source data and cannot be separately identified.

The Kansas rate of -30.3 percent ranked nineteenth among the states, meaning Kansas avoided the effects of the pandemic more than most states. (In the first quarter, only four states contracted less than Kansas.) The national rate was -31.4 percent, with the rate for the Plains states at -30.6 percent. (For this data, BEA defines Plains states as Iowa, Kansas, Minnesota, Missouri, Nebraska, North Dakota, and South Dakota.)

Over the last eight quarters, Kansas has averaged quarterly growth rates of -3.3 percent in annual terms. For the nation, the rate was -2.9 percent. For the Plains states, it was -3.2 percent. 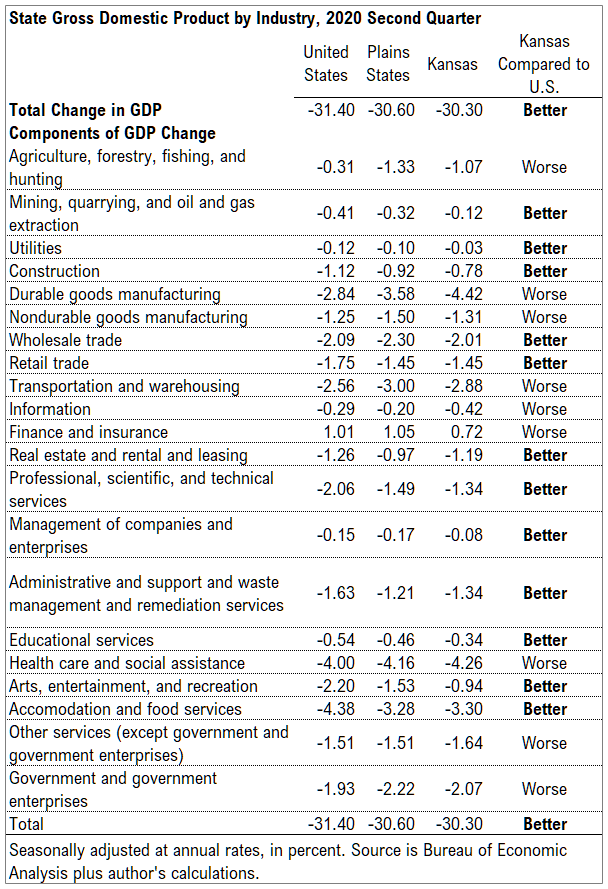 For the complete release at BEA, click on Gross Domestic Product by State, 2nd Quarter 2020.