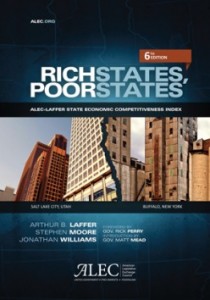 ALEC is a nationwide organization of state legislators, the center-right counterpart of the center-left National Conference of State Legislatures (NCSL).

The report praises tax reform legislation Kansas passed in 2012. In a section headed “The Kansas Uprising”:

Gov. Sam Brownback campaigned in 2010 promising a tax cut to make the Kansas economy more competitive. But his plan to reduce tax rates and close loopholes ran into trouble in the Senate, which had been controlled by opponents of tax reform. The governor managed to pass his tax cut, but the Left-leaning Senate coalition refused to cut loopholes and pork spending projects. … The most outside of the box section of the plan is the “Small Business Accelerator,” which exempts all non-wage income from taxation for all pass-through entities. This means that the vast majority of small businesses in Kansas are now not subject to an income tax on their business earnings. This includes all sole proprietorships, partnerships, S corporations, and limited liability companies (LLCs). … While the Kansas tax reform plan has received criticism from both sides of the political spectrum, the resulting economic growth in Kansas speaks for itself. The plan is not perfect, but it is a bold step toward pro-growth tax reform that will certainly continue to unlock more of Kansas’ economic potential.

No praise, however, for public pension reform. Commenting on lack of progress in converting to defined-contribution plan and a proposal to borrow additional money for fund KPERS, the report concludes:

The result was a double loss for pension reform advocates in Kansas. There would be no structural reform, and the Kansas retirement system and taxpayers would take on $1.5 billion in additional debt. While the proposal for fundamental pension reform failed this session, fiscally conservative legislators and Gov. Brownback are optimistic that real reform will have a good chance of passing in the future.

The bill to issue the KPERS bonds is still pending in the legislature.

An important chapter in this year’s report is titled “There They Go Again: A New Dose of Junk Economics.” This chapter addresses critics of Rich States, Poor States. In particular, this chapter explains the caution required when using per-capita statistics.

Kansas among the states

The Economic Performance Rank considers a state’s gross domestic product, absolute domestic migration, and nonfarm payroll employment. This ranking details states’ individual performances over the past ten years based on the economic data.

For Economic Performance Ranking, Kansas is ranked 35th among the states. In previous years, Kansas was ranked 39th, 40th, and 34th. Kansas has made some progress in this area.

The second measure, the Economic Outlook Rank, is a “forecast based on a state’s current standing in 15 state policy variables. Each of these factors is influenced directly by state lawmakers through the legislative process. Generally speaking, states that spend less — especially on income transfer programs, and states that tax less — particularly on productive activities such as working or investing — experience higher growth rates than states that tax and spend more.”

It’s in this ranking that Kansas made most progress. Kansas is ranked 11th, up from 26th the year before. In previous years, Kansas averaged around 26th place.

Kansas scores low in Property Tax Burden (29), Sales Tax Burden (35), Debt Service as a Share of Tax Revenue (41), Public Employees Per 10,000 of Population (48), and having a low number of tax expenditure limitations.