Jobs fell in December 2020, marking the first loss since the recovery from the pandemic began.

The closely-followed jobs number fell in December 2020 by 140,000 jobs from the prior month. The unemployment rate did not change, remaining at 6.7 percent.

The summary report from BLS may be found here.

In its reporting, the Wall Street Journal led with, “The U.S. shed 140,000 jobs in December as a resurgence of the coronavirus ended seven months of job growth and weakened the recovery.”

It added: “Restaurants and bars drove the decline by cutting 372,000 jobs last month, the Labor Department said Friday. The broader category of hospitality and leisure industries—which adds hotels, museums, tourist sites—also saw losses, while schools and governments cut jobs as the pandemic triggered new restrictions on activity. Jobs gains in most other industries weren’t enough to offset the sharp decline in areas sensitive to the state of the pandemic.” See Virus Surge Ends Seven Months of U.S. Jobs Growth.

Axios reported: “The bottom line: The labor market was digging out from the over 22 million jobs lost because of the coronavirus. The way worse-than-expected December numbers chips away at that progress, dashing any lingering hopes of a ‘V-shaped’ job recovery. The job market is 9.8 million jobs short of where it was before the pandemic hit, with 55% of the jobs lost in March and April having come back.” See U.S. shed 140,000 jobs in December, halting labor market recovery. 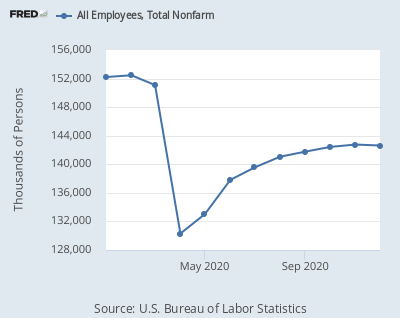 In an opinion piece in the Washington Post, Catherine Rampell wrote: “The December jobs report in one line: We’re not catching up; in fact, we’re falling further behind. When the pandemic first hit the United States, we lost 22 million jobs almost immediately. Then after seven months of gains — albeit decelerating ones — the economy tipped back into job losses in December, the Bureau of Labor Statistics reported Friday. … The economy endures shocks and downturns, of course, and Trump was unlucky enough to sustain an unusually large shock toward the end of his presidency. This shock was so big that it wiped out all the prior gains under his tenure (which had been good, as I’ve noted before, but not appreciably different from those under his predecessor, Barack Obama).” See December’s jobs report confirms Trump is set to be the worst jobs president on record.

My interactive visualization is updated with this data and is available here.