To pay for the Obama taxing and spending agenda, the country will need much more economic growth. Unfortunately, the rate of growth is slowing just when we need greater rates of growth.

It’s commonly thought that annual real (after-inflation) growth of three percent is required just to keep up with population. More than that is needed to restore the loss in middle-class income during Obama’s first term. But here’s what has happened to the rate of growth. 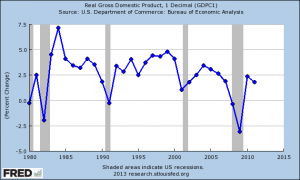 The direction of change in economic growth is moving in the wrong direction, and it’s far below what is needed. Darkening the horizon are the planned increases in spending, in particular ObamaCare, will be a further drag on the economy. Other Obama policies are distinctly anti-growth. It’s difficult to have an optimistic outlook.

Mr. Bush and Republicans in Congress capitulated to and even promoted each and every government bailout and populist redistribution canard put before them. It’s a long list, starting with the 2003 trillion-dollar Medicare prescription drug benefit and culminating with the actions taken to stem the 2008 financial meltdown — the $700 billion Troubled Asset Relief Program, the bailout of insurance giant AIG and government-sponsored lenders Fannie Mae and Freddie Mac, the ill-advised 2008 $600-per-person tax rebate, the stimulus add-ons to 2007’s housing and farm bills, etc. The script had it that greedy right-wingers were the cause of our collapse, and deficit spending and easy money the answer.

Following is an interactive visualization of federal revenues, expenditures, and the deficit as a percentage of gross domestic product that illustrates these trends. Use the visualization below, or click here to open it in a new window.