In Rich States, Poor States, Kansas continues with middle-of-the-pack performance, and fell in the forward-looking forecast for the second year in a row.

In the 2015 edition of Rich States, Poor States, Utah continues its streak at the top of Economic Outlook Ranking, meaning that the state is poised for growth and prosperity. Kansas continues with middle-of-the-pack performance rankings, and fell in the forward-looking forecast.

Rich States, Poor States is produced by American Legislative Exchange Council. The authors are economist Dr. Arthur B. Laffer, Stephen Moore, who is Distinguished Visiting Fellow, Project for Economic Growth at The Heritage Foundation, and Jonathan Williams, who is vice president for the Center for State Fiscal Reform at ALEC.

Rich States, Poor States computes two measures for each state. The first is the Economic Performance Ranking, described as “a backward-looking measure based on a state’s performance on three important variables: State Gross Domestic Product, Absolute Domestic Migration, and Non-Farm Payroll Employment — all of which are highly influenced by state policy.” The process looks at the past ten years.

Looking forward, there is the Economic Outlook Ranking, “a forecast based on a state’s current standing in 15 state policy variables. Each of these factors is influenced directly by state lawmakers through the legislative process. Generally speaking, states that spend less — especially on income transfer programs, and states that tax less — particularly on productive activities such as working or investing — experience higher growth rates than states that tax and spend more.”

For economic performance this year, Kansas is twenty-eighth. That’s up from thirty-second last year.

In this year’s compilation for economic outlook, Kansas ranks eighteenth, down from fifteenth last year and eleventh the year before. In 2008, the first year for this measure, Kansas was twenty-ninth.

Kansas compared to other states

A nearby chart shows the Economic Outlook Ranking for Kansas and some nearby states, shown as a trend over time since 2008. The peak of Kansas in 2013 is evident, as is the decline since then. 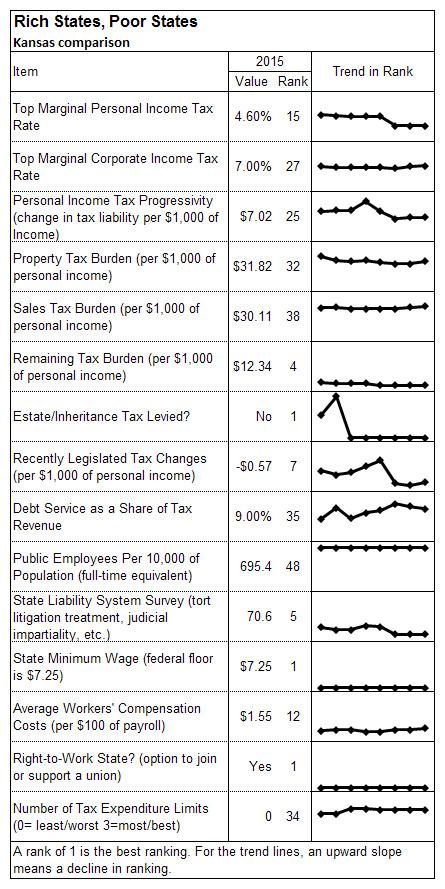 Kansas fell in the Economic Outlook Ranking from 2013 to 2015. To investigate why, I gathered data for Kansas from 2008 to 2015. The nearby table shows the results for 2015 and the rank among the states, with the trend since 2008 shown. A rank of one is the best ranking, so for the trend lines, an upward slope means a decline in ranking.

There are several areas that may account for the difference. One value, “Top Marginal Corporate Income Tax Rate,” did not change from 2013 to 2015, remaining at 7.00%. But the ranking for Kansas fell from 24 to 27, meaning that other states improved in this measure relative to Kansas.

In “Recently Legislated Tax Changes (per $1,000 of personal income)” Kansas fell one position in rank.

Kansas remains one of the states with the most public employees, with 695.4 full-time equivalent employees per 10,000 population. This ranks forty-eighth among the states.

“Average Workers’ Compensation Costs (per $100 of payroll)” rose by one cent, and Kansas fell two spots in ranking.

Kansas has no tax and expenditure limitations, which is a disadvantage compared to other states.

How valuable is the ranking?

After the 2012 rankings were computed, ALEC looked retrospectively at rankings compared to actual performance. The nearby chart shows the correlation of ALEC-Laffer state policy ranks and state economic performance. In its discussion, ALEC concluded:

There is a distinctly positive relationship between the Rich States, Poor States’ economic outlook rankings and current and subsequent state economic health.

The formal correlation is not perfect (i.e., it is not equal to 100 percent) because there are other factors that affect a state’s economic prospects. All economists would concede this obvious point. However, the ALEC-Laffer rankings alone have a 25 to 40 percent correlation with state performance rankings. This is a very high percentage for a single variable considering the multiplicity of idiosyncratic factors that affect growth in each state — resource endowments, access to transportation, ports and other marketplaces, etc.