The spurious arguments made in support of the wind production tax credit shows just how difficult it is to replace cronyism with economic freedom. From October, 2012.

We often see criticism of politicians for sensing “which way the wind blows,” that is, shifting their policies to pander to the prevailing interests of important special interest groups. The associated negative connotation is that politicians do this without regard to whether these policies are wise and beneficial for everyone.

So when a Member of Congress takes a position that is literally going against the wind in the home district and state, we ought to take notice. Someone has some strong convictions.

This is the case with U.S. Representative Mike Pompeo, a Republican representing the Kansas fourth district (Wichita metropolitan area and surrounding counties.)

The issue is the production tax credit (PTC) paid to wind power companies. For each kilowatt-hour of electricity produced, the United States government pays 2.2 cents. Wind power advocates contend the PTC is necessary for wind to compete with other forms of electricity generation. Without the PTC, it is said that no new wind farms would be built. 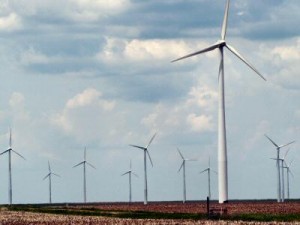 The PTC is an important issue in Kansas not only because of the many wind farms located there, but also because of wind power equipment manufacturers that have located in Kansas. An example is Siemens. That company, lured by millions in local incentives, built a plant in Hutchinson. Employment was around 400. But now the PTC is set to expire on December 31, and it’s uncertain whether Congress will extend the program. As a result, Siemens has laid off employees. Soon only 152 will be at work in Hutchinson, and similar reductions in employment have happened at other Siemens wind power equipment plants.

Rep. Pompeo is opposed to all tax credits for energy production, and has authored legislation to eliminate them. As the wind PTC is the largest energy tax credit program, Pompeo and others have written extensively of the market distortions and resultant economic harm caused by the PTC. A recent example is Puff, the Magic Drag on the Economy: Time to let the pernicious production tax credit for wind power blow away, which appeared in the Wall Street Journal.

The special interests that benefit from the PTC are striking back. An example comes from Dave Kerr, who as former president of the Hutchinson/Reno County Chamber of Commerce played a role in luring Siemens to Hutchinson. Kerr’s recent op-ed in the Hutchinson News is notable not only for its several attempts to deflect attention away from the true nature of the PTC, but for its personal attacks on Pompeo.

There’s no doubt that the Hutchinson economy was dealt a setback with the announcement of layoffs at the Siemens plant that manufactures wind power equipment. Considered in a vacuum, these jobs were good for Hutchinson. But we shouldn’t make our nation’s policy in a vacuum, that is, bowing to the needs of special interest groups — sensing “which way the wind blows.” When considering everything and everyone, the PTC paid to producers of power generated from wind is a bad policy. We ought to respect Pompeo for taking a principled stand on this issue, instead of pandering to the folks back home.

Kerr is right about one claim made in his op-ed: The PTC for wind power is not quite like the Solyndra debacle. Solyndra received a loan from the Federal Financing Bank, part of the Treasury Department. Had Solyndra been successful as a company, it would likely have paid back the government loan. This is not to say that these loans are a good thing, but there was the possibility that the money would have been repaid.

But with the PTC, taxpayers spend with nothing to show in return except for expensive electricity. And spend taxpayers do.

Kerr, in an attempt to distinguish the PTC from wasteful government spending programs, writes the PTC is “actually an income tax credit.” The use of the adverb “actually” is supposed to alert readers that they’re about to be told the truth. But truth is not forthcoming from Kerr — there’s no difference. Tax credits are government spending. They have the same economic effect as “regular” government spending. To the company that receives them, they can be used — just like cash — to pay their tax bill. Or, the company can sell them to others for cash, although usually at a discounted value.

From government’s perspective, tax credits reduce revenue by the amount of credits issued. Instead of receiving tax payments in cash, government receives payments in the form of tax credits — which are slips of paper it created at no cost and which have no value to government. Created, by the way, outside the usual appropriations process. That’s the beauty of tax credits for big-government spenders: Once the program is created, money is spent without the burden of passing legislation.

If we needed any more evidence that PTC payments are just like cash grants: As part of Obama’s ARRA stimulus bill, for tax years 2009 and 2010, there was in effect a temporary option to take the federal PTC as a cash grant. The paper PTC, ITC, or Cash Grant? An Analysis of the Choice Facing Renewable Power Projects in the United States explains.

Astonishingly, the wind PTC is so valuable that wind power companies actually pay customers to take their electricity. It’s called “negative pricing,” as explained in Negative Electricity Prices and the Production Tax Credit:

As a matter of both economics and public policy, no government production tax subsidy should ever be so large that it creates an incentive for a business to actually pay customers to take its product. Yet, the federal Production Tax Credit (“PTC”) for wind generation is doing just that with increasing frequency in electricity markets across the United States. In some “wind-rich” regions of the country, wind producers are paying grid operators to take their generation during periods of surplus supply. But wind producers more than make up the cost of the “negative price” payment, because they receive a $22/MWH federal production tax credit for every MWH generated.

In western Texas since 2008, wind power generators paid the electrical grid to take their electricity ten percent of the hours of each day.

Once we recognize that tax credits are the same as government spending, we can see the error in Kerr’s argument that if the PTC is ended, it is the same as “a tax increase on utilities, which, because they are regulated, will pass on to consumers.” Well, government passes along the cost of the PTC to taxpayers, illustrating that there really is no free lunch.

Kerr attacks Pompeo for failing to “crusade” against two subsidies that some oil companies receive: Intangible Drilling Costs and the Percentage Depletion Allowance. These programs are deductions, not credits. They do provide an economic benefit to the oil companies that can use them (“big oil” can’t use percentage depletion at all), but not to the extent that tax credits do.

Regarding these deductions, last year Pompeo introduced H. Res 267, titled “Expressing the sense of the House of Representatives that the United States should end all subsidies aimed at specific energy technologies or fuels.”

In the resolution, Pompeo recognized the difference between deductions and credits, the latter, as we’ve seen, being direct subsidies: “Whereas deductions and cost-recovery mechanisms available to all energy sectors are different than credits, loans and grants, and are therefore not taxpayer subsidies; [and] Whereas a deduction of costs and cost recovery with respect to timing is not a subsidy.”

Part of what the resolution calls for is to “begin tax simplification and reform by eliminating energy tax credits and deductions and reducing income tax rates.”

Kerr wants to deflect attention away from the cost and harm of the PTC. Haranguing Pompeo for failing to attack percentage depletion and IDC with the same fervor as tax credits is only an attempt to muddy the waters so we can’t see what’s happening right in front of us. It’s not, as Kerr alleges, “playing Clintonesque games of semantics with us.” As we’ve seen, Pompeo has called for the end of these two tax deductions.

If we want to criticize anyone for inconsistency, try this: Kerr criticizes Pompeo for ignoring the oil and gas deductions, “which creates a glut in natural gas that drives down the price to the lowest levels in a decade.” These low energy prices should be a blessing to our economy. Kerr, however, demands taxpayers pay to subsidize expensive wind power so that it can compete with inexpensive gas. In the end, the benefit of inexpensive gas is canceled. Who benefits from that, except for the wind power industry? The oil and gas targeted deductions also create market distortions, and therefore should be eliminated. But at least they work to reduce prices, not increase them.

By the way, Pompeo has been busy with legislation targeted at ending other harmful subsidies: H.R. 3090: EDA Elimination Act of 2011, H.R. 3994: Grant Return for Deficit Reduction Act, H.R. 3308: Energy Freedom and Economic Prosperity Act, and the above-mentioned resolution.

I did notice, however, that Pompeo hasn’t called for the end to the mohair subsidy. Will Kerr attack him for this oversight?

Finally, Kerr invokes the usual argument of government spenders: Cut the budget somewhere else. That’s what everyone says.

Creating entire industries that exist only by being propped up by government subsidy means that we all pay more to support special interest groups. A prosperous future is best built by relying on free enterprise and free markets in energy, not on programs motivated by the wants of politicians and special interests. Kerr’s attacks on Pompeo illustrate how difficult it is to replace cronyism with economic freedom.