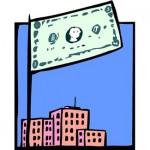 A Kansas business welfare program is more attractive and valuable than elimination of the Kansas corporate income tax, at least for some influential corporations in Kansas. The program is High Performance Incentive Program (HPIP), which grants tax credits in exchange for capital investment.

In April Dr. Art Hall of the Center for Applied Economics at the Kansas University School of Business delivered a presentation on Kansas tax reform, and he explained the situation (video here):

There is something called an HPIP investment tax credit. It stands for High Performance Incentive Program. This is a very valuable tax credit to corporations. But, you don’t get it automatically. You have to apply to the state. Only about 100 or 125 of these credits are given out each year. It’s about $50 to $60 million per year. It’s a very large number. Back in 2011, … the plan was to get rid of all of these special deals, especially this one credit, and we’re going to reduce all the rates.

In other words, the business welfare benefits these corporations — many thought to be in the aerospace industry — receive from the state is greater than the Kansas income tax they pay. That’s the only conclusion we can draw from their choice of favoring the HPIP credits over elimination of their Kansas income tax.

A table from Hall’s paper Embracing Dynamism: The Next Phase in Kansas Economic Development Policy holds calculations that reveal this effect.

The 11.92% that is highlighted in yellow shows the deformation of the business investment and tax landscape that causes some corporations to prefer HPIP tax credits over zero tax rates. Each row in the table represents a different scenario, one being retaining the HPIP credit. Columns represent various amounts of investment. It is in the column for the largest amount of investment that HPIP is most valuable, based on expected rate of return for the investment. HPIP is also more valuable than the strategy in any other row, considering the large investment column. HPIP, we can see, favors large corporations over small, as it is most valuable when making large investments.

A problem, as Hall told the audience in the video, is that the HPIP is not given automatically to all companies that make capital investments. The credit must be applied for, various conditions must be met, and approval received.

This system of selecting which companies receive targeted economic development investment in Kansas is contrary to market principals. The state, rather than markets, is making investment decisions. It’s also contrary to Hall’s economic dynamism concept explained in the paper referenced above. In this idea, the goal of the state is to encourage a large number of business startups each year, and then nurture conditions where all have a chance to thrive. Many will not survive, but some will. We don’t know which firms will thrive, so it’s important to treat all firms equally and give all a chance.

Programs like HPIP are contrary to this philosophy, and instead concentrate the state’s investments in existing, often large, companies — the companies that make the large capital investments for which HPIP returns the most favorable financial results. This is also an illustration of the difference between a business-friendly environment and capitalism.