In Kansas for October 2022, the labor force was steady, the number of people working rose, and the unemployment rate rose, all compared to the previous month. Over the year, Kansas has moved to the middle of the states in growth.

Data released from the Bureau of Labor Statistics, part of the United States Department of Labor, shows a mixed employment picture in Kansas for October 2022 when compared to the previous month.

Of special note this month: Considering year-over-year nonfarm job growth, Kansas no longer has the lowest value in the nation, as it had in some recent months. Now Kansas is near the middle of the states.

There are now 141,800 (11.1 percent) more jobs in Kansas than in April 2020, which is the low point since the pandemic’s start. There are 15,600 (1.1 percent) fewer jobs than in February 2020, just before the pandemic. These are counts of nonfarm jobs with employers in Kansas, without regard to the residence of the employee. Considering employed people from the household survey, there are now 153,419 (11.8 percent) more working people in Kansas than in April 2020, and 4,884 (0.3 percent) more than in February 2020. The household survey counts Kansas residents with nonfarm jobs, without regard to the location of the job. 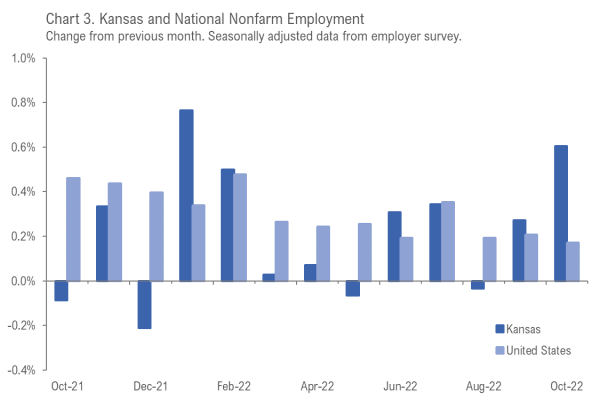 Chart 4a shows job changes for Kansas and the nation from the same month one year ago. Note that the change for Kansas is always positive and usually significantly below that of the nation, although the gap has narrowed over the past three months. 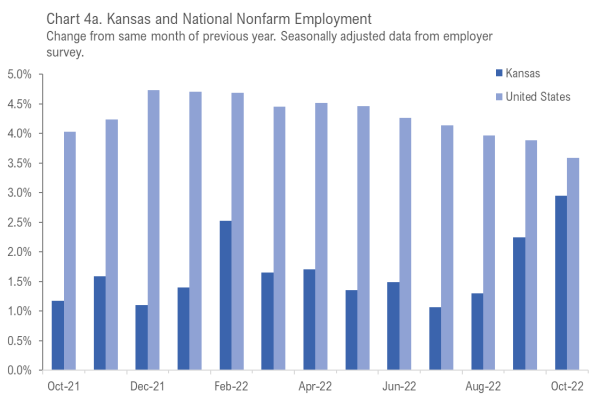 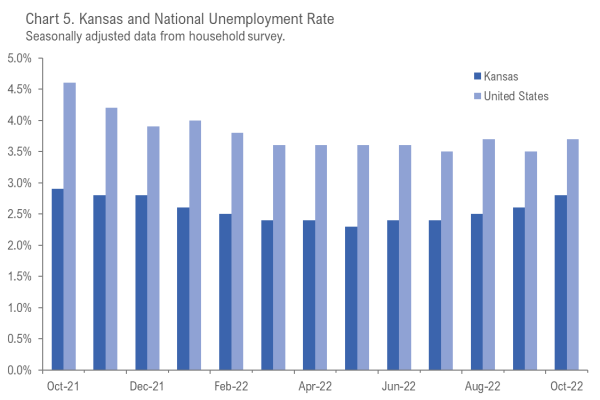 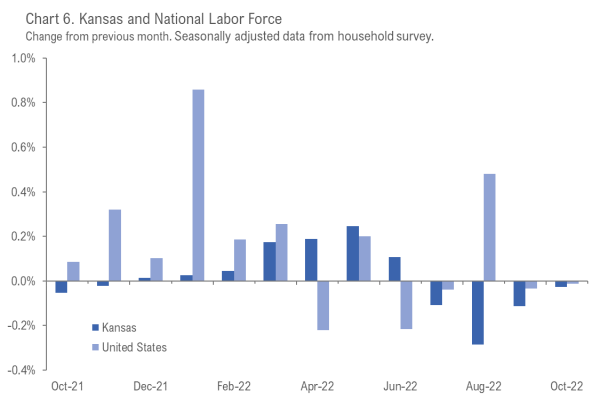 For industry groups, the following charts (7a and 7c) show the number of employees in various industries in October 2021 and October 2022. 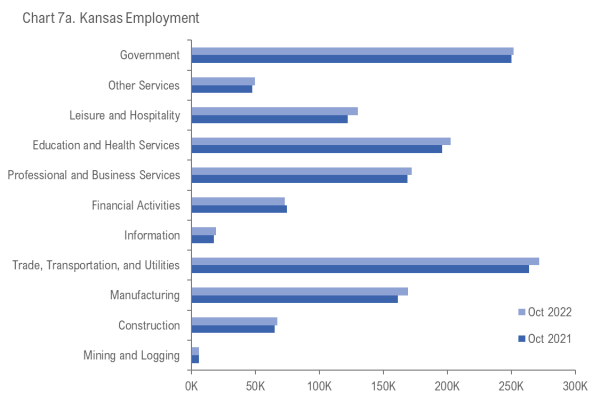 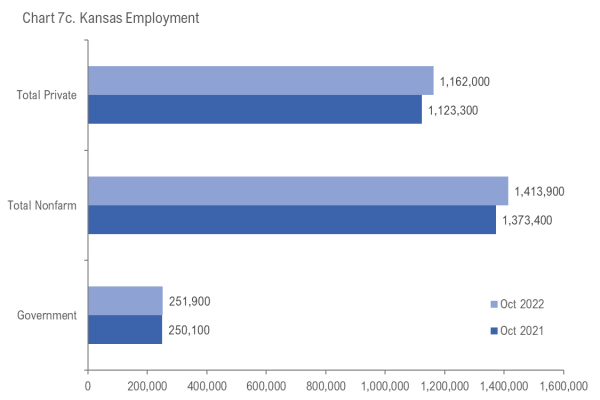 Chart 7b uses the same data but shows the percent change from October 2021 to October 2022. These industry groups have significant gains:

Government increased by a small amount. 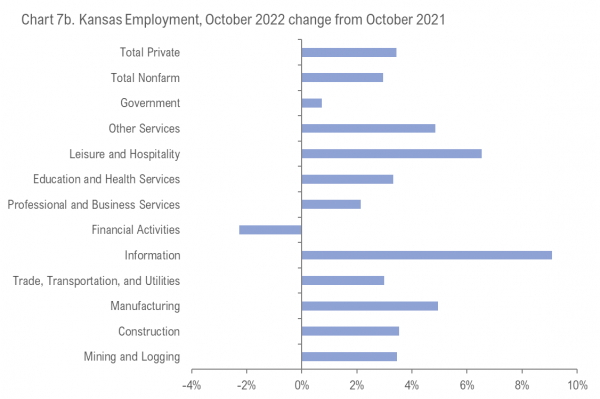 The rate of job growth in Kansas over the year has been lowest in the nation in some recent months. In October Kansas rose to the middle, ranking twenty-seventh among the states and the District of Columbia. This rise in ranking was boosted by the strong growth in October over September, which at 0.6 percent ranked third. The following chart shows the monthly and annual change in the number of jobs in the states, along with the rank of the state. 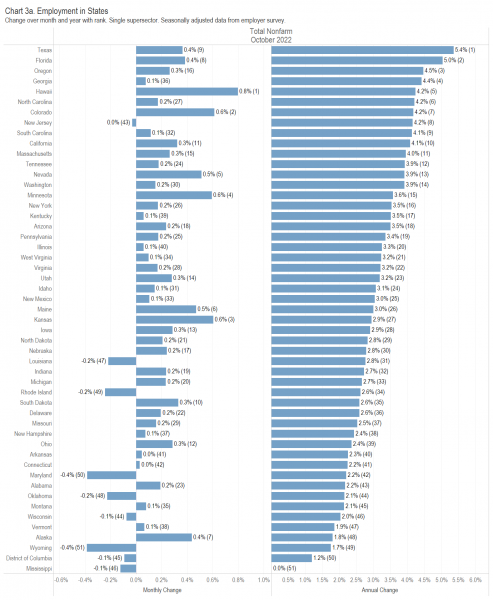 The report for this month from the Kansas Department of Labor is here. The report from BLS may be found here. It appears there are no news releases or social media posts from Governor Kelly on this topic. 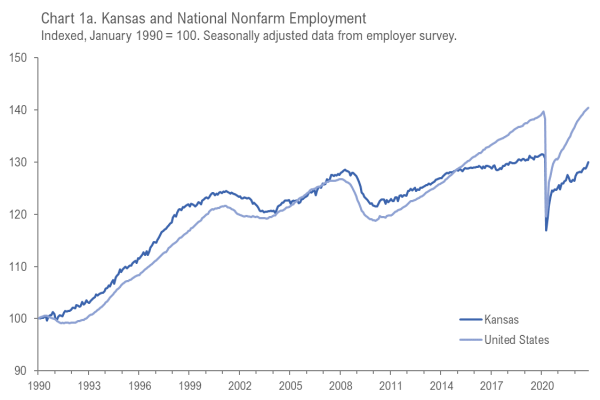 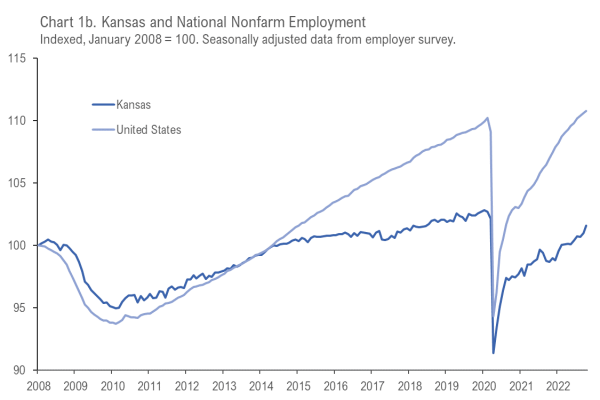 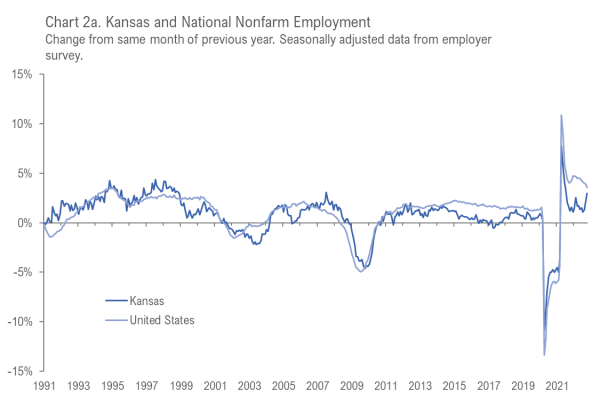 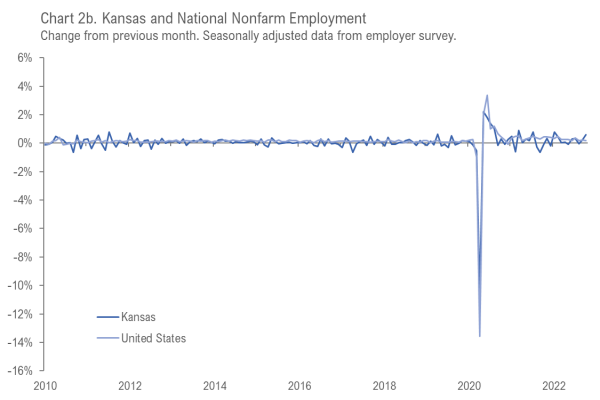