To examine the record of presidents regarding economics, I gathered data from several sources and present it in an interactive visualization. It holds about 45,000 observations of 71 variables.

The example shown below is the Consumer Price Index, the most widely cited measure of inflation. It displays the change in CPI, by month, from the start of each president’s term. Each president starts at zero, and then progresses. We often hear that inflation today is the worst in 40 years. In this chart, it is easy to spot the Carter years. We also see that prices rose steeply during the Ford administration, and also during the early Reagan administration. It may be difficult to spot these differences in the static illustration shown below. In the interactive visualization, which anyone may use, you may spotlight data by clicking, which makes busy charts easier to see. Or, you may decide to display just one, two, or more presidents. 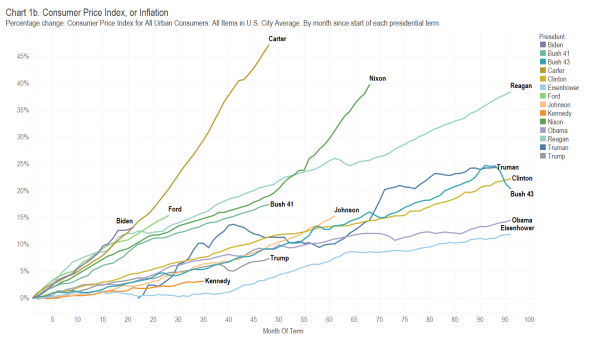