New research from Kansas Policy Institute reinforces what some have known but many have discounted: The Kansas Public Employee Retirement System is in poor financial shape, and it’s going to cost Kansans a lot to fix it. It is urgent that we enact substantive and meaningful reforms now, rather than later. KPI writes the following in introducing its new study Preventing Bankruptcy in the Kansas Public Employees Retirement System. 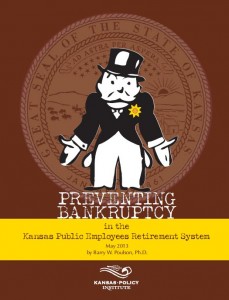 It turns out that the $9.2 billion hole found in Kansas’ public pension program will balloon under new accounting standards used by governments across the country.

Under the current standards, Kansas’ pension system (KPERS) is funded at 59.2%, 80% is a generally accepted barometer of pension health. These numbers demonstrate that Kansas has one of the worst funded pension systems in the country.

Each person in Kansas will have to pay $3,285 to fill our KPERS hole under the old standards and things will only get worse.

The executive summary of the study follows.

Recent evidence reveals that the Kansas Public Employees Retirement System (KPERS) is one of the most underfunded pension plans in the country (59 percent funding ratio at the end of 2011) and that there is a high probability the plan will not have sufficient funds to meet pension obligations over the next decade. This funding ratio will deteriorate further under the new accounting standards discussed below. The solution to this funding crises is to bring pension benefits into line with the costs of pension plans for individual employees. A number of states have successfully enacted structural reforms in their state pension plans to accomplish this objective, including defined contribution and hybrid plans.

Unfortunately the recent reforms enacted in KPERS creating a cash balance plan for new employees fails to accomplish that objective. This study provides a roadmap for pension reform in Kansas, the major conclusions of the study are:

1. Use the New GASB Accounting Standard

The new GASB standards to be implemented in 2013 and 2014 will require realistic actuarial assumptions and reporting. It is time for Kansas and other states too incorporate this more realistic data in transparent and timely reporting and to use this data in policy formulation.

Using more realistic actuarial assumptions, via new GASB standards, most states, including Kansas, will find that they face a funding crises in their state and local pension plans. Kansas legislators must follow the lead of state and local governments that have successfully replaced these defined benefit pension plans with defined contribution or hybrid plans.

Structural reforms enacted to solve the funding crises in state and local pension plans have been and will continue to be subject to legal challenges, and Kansas is well positioned to meet these legal challenges.

Successful pension reform in other states such as Utah and Rhode Island has required a bi-partisan effort in the legislature and support from all the stakeholders. Generating this support for pension reform in Kansas will require an education campaign. Kansas citizens must understand that the current defined benefit pension plan is not sustainable. Solving the funding crisis in KPERS will require burden sharing by all the stakeholders, including current employees, retirees and new employees.

The full study is at Preventing Bankruptcy in the Kansas Public Employees Retirement System.